There comes a time when every freshwater angler wants to catch some fish in saltwater, and who can blame us.

Pictures of anglers catching bonefish or tarpon off the beach or videos of anglers switching sailfish on light spinning gear is certain to drive any freshwater angler crazy and want a piece of the action.

But, chances are, you don’t own a saltwater reel. So, you use freshwater reels in saltwater?

The short answer is yes, you can. Freshwater fly reels, spinning reels, and baitcasters all do the same job in freshwater as they do in saltwater. But, using them in saltwater is not advisable as they are built quite differently, and for different reasons.

In this article, I am going to run through how you can use a freshwater reel in saltwater safely, why it isn’t a good idea to do it all the time, and discuss the differences between the two types of reels.

What are the Risks of Using a Freshwater Reel in Saltwater?

There are two places where freshwater reels fall down in saltwater.

The first is that saltwater species are generally a lot bigger and tougher than freshwater species, and chances are your freshwater reel isn’t built to subdue them. This is particularly true of the drag system.

The second is that saltwater is incredibly destructive to certain materials while others can handle it. Freshwater reels are not made from the right materials to handle the damage saltwater can do to them, and therefore will get damaged. 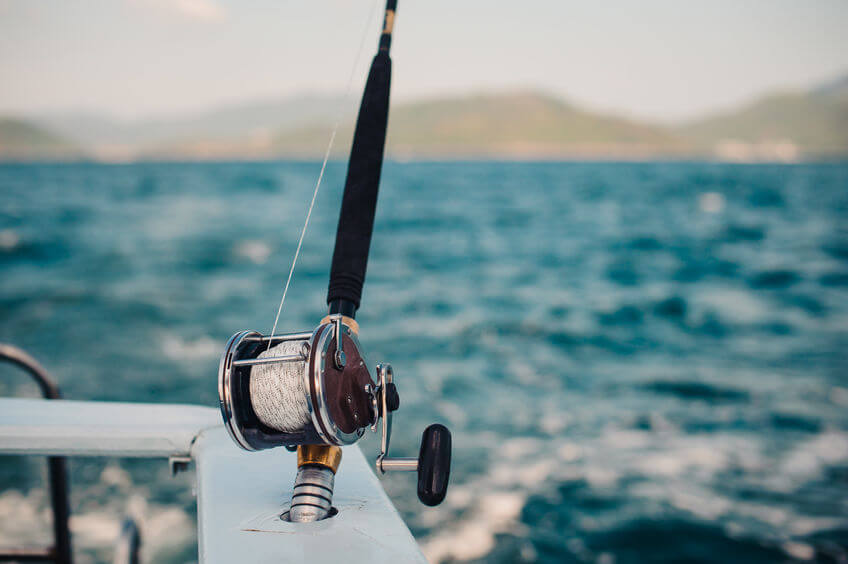 What are the Differences between Freshwater and Saltwater Reels?

Saltwater reels are just built differently from freshwater reels. They are made to survive in saltwater and to handle the big old species that swim around the oceans.

But, what is it behind the curtain that ensures they can do this?

Their Line Capacity is Much Larger

Saltwater fish species can go on long runs. Sailfish swim at 110 km/h (68 mph), for example, and can peel off 200 yards of line in one run. They are also not hemmed into a river or a lake, so they can literally just keep on going if they want to.

Saltwater reels come with spools that can hold a lot of line and heavy line too. Think 250 yards of 50 lb line and more.

Now, not all species go on long runs in the ocean. Speckled trout or redfish won’t spool you on a freshwater reel. But if you go for larger species like tarpon, or offshore for tuna or bottom fish, chances are you will see all your line disappear and it snap in an instant. 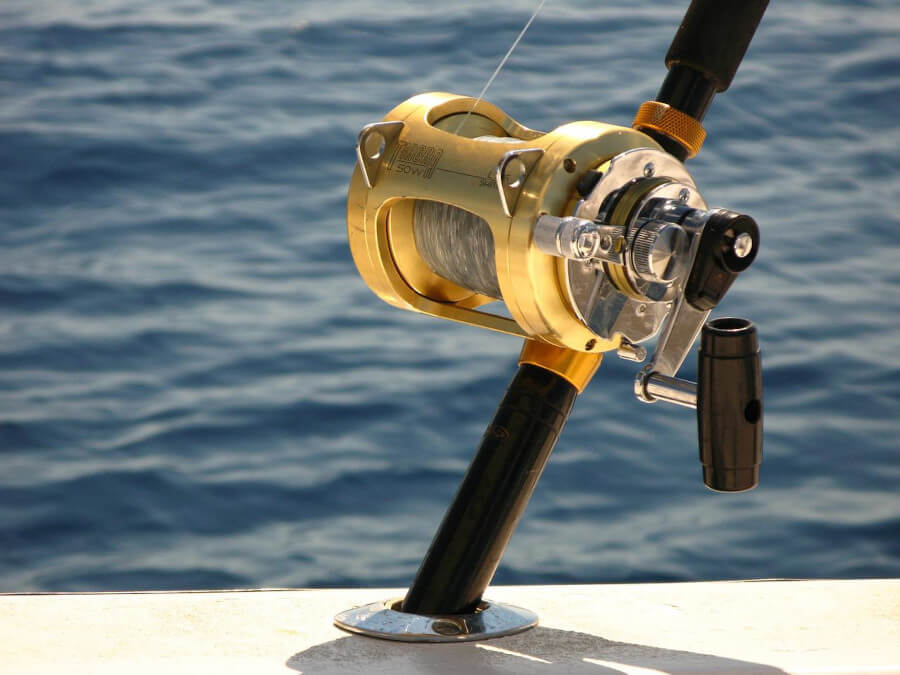 If you were to use a freshwater reel in these circumstances, chances are you would be spooled and your reel’s drag system would probably be broken too.

How much drag you need depends on what species you are planning on fishing for and the weight of the line you plan on using. The general rule is to have at least ⅓ of the drag pressure of the line you are using.

How and What They are Made Out Of

Saltwater reels are made from materials that can handle saltwater such as stainless steel, aluminum, brass, titanium, and more. These are all corrosion-resistant and don’t rust when they are used in saltwater.

Saltwater reels also use sealed and stainless steel bearings. Some of them even have sealed drag systems, or are 100% sealed meaning no water or salt can even get into the reel. This stops it from destroying the inner workings of the reel.

Freshwater reels, on the other hand, do not use the same quality of materials, nor do they come with sealed bodies or drag systems, as they don’t need it to survive in freshwater.

Considering that saltwater reels are made of higher quality materials, have bigger and better drag systems, and are generally much larger than freshwater reels, they cost more.

As you probably know with fishing gear, the more you pay for it, the better the quality is going to be. You should expect to pay around twice as much for a saltwater reel than for a freshwater reel but it is worth it.

Once you own a saltwater reel, you can use it in both freshwater and saltwater without any worries, making it twice as versatile as a freshwater reel. 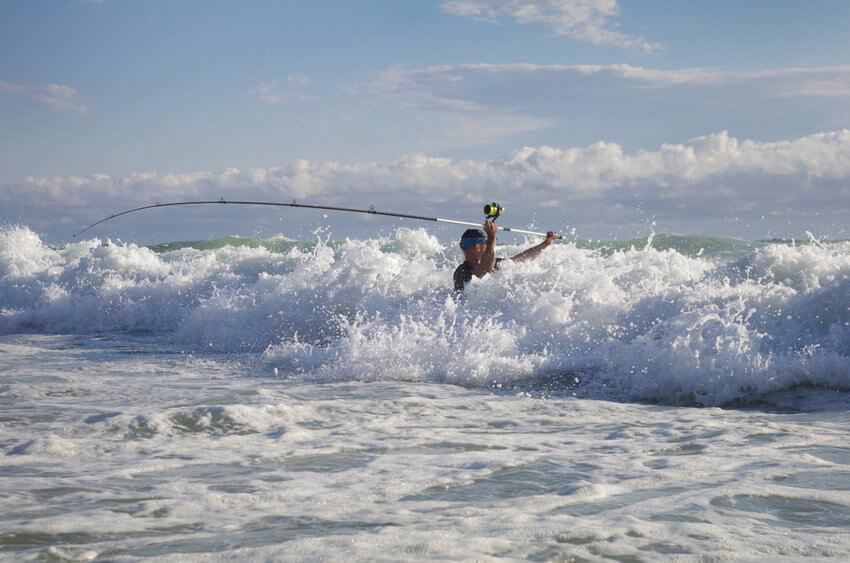 When Can You Get Away with Using a Freshwater Reel in Saltwater?

So, is there ever a time when you can use your freshwater reel in the sea and get away with not buying an expensive saltwater reel?

Yes, there is but there are some things you have to think about first.

Can Your Reel Handle the Fish?

Firstly, is your reel tough enough to handle the fish you intend to catch? If you are planning on catching some small snappers off the dock, then chances are your freshwater bass reel is going to be able to handle it.

But, if you want to catch a permit or a tarpon, chances are your reel isn’t built for the size of the fish or the runs it can take.

Is Your Reel Going to get Submerged?

Secondly, is there a chance your reel is going to get dunked into saltwater?

If you are fishing off a boat or off a dock, your freshwater reel probably isn’t going to get submerged in saltwater. This means the inner workings are safe from being filled with salt.

If you go fishing off the beach, in the surf, wading, or on a kayak, then there is a serious chance that your freshwater reel will get dunked.

This can cause the entire reel to seize up and cause it to fail very quickly.

How Long are You Planning on Using it in Saltwater?

Make Sure You Clean it Afterwards

Cleaning your reel after you use it in saltwater is imperative and this is the case for both freshwater and saltwater reels.

This removes the salt and stops any corrosion.

We look at how to do this in detail in the next section. 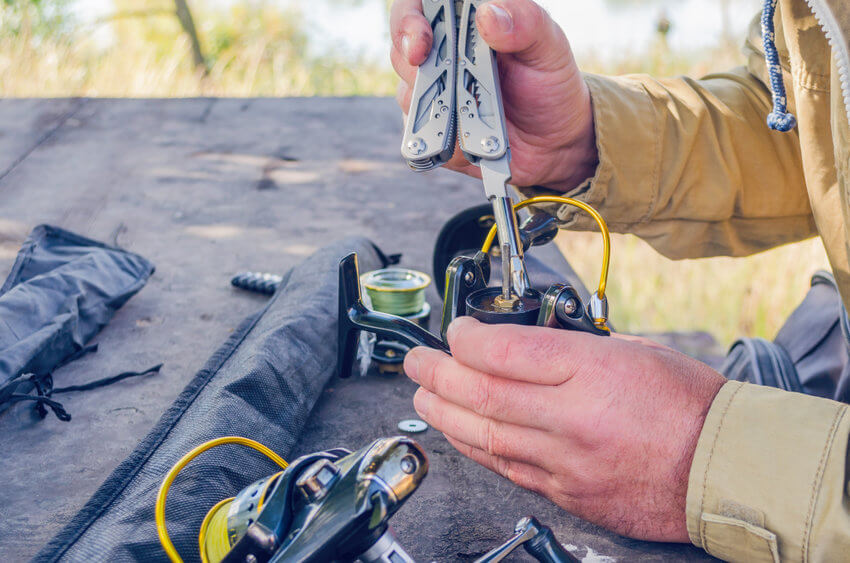 How to Care for Your Reel After Using it in Saltwater

Whether you only cast once or spend the whole day on the sea, your reel needs some care in order to survive.

There are some right ways to care for a reel and some wrong ways. There is also daily care and monthly or seasonal care.

After every day of fishing in saltwater you need to wash the salt off your reel and this is done in a particular way.

Do not, ever, use a high-pressure hose to wash your reel down with. All this does is push the salt deeper into the reel and it can even push it into the inner workings of the reel too.

When you are done using your reel in saltwater for a while, then it is time to take the reel apart and clean it.

Make sure you use the manual as some reels are more complicated to service than others. Fly reels are very simple but complicated spinning reels are a little different.

The idea is to open up the reel, clean the insides, and re-oil and re-grease the internal components that need it. This protects them and ensures your reel functions properly and smoothly the next time you use it.

Once the reel is serviced you can put it into storage without any worries and it will work perfectly the next time you bring it out to play.

So, you can use freshwater reels in saltwater but only in the right situations. It still isn’t advisable, and you wouldn’t catch me doing it, but by following my advice above, you should get away with it.

If you have any questions about when you can use a freshwater reel in saltwater or have some stories you want to share, please leave a comment below. We would love to hear from you!

Growing up fishing on streams and lakes in Kenya and the UK, Jamie has traveled the world in search of fishing nirvana. From his time managing bonefish lodges in the Bahamas and running fishing safaris in East Africa, all the way to guiding on the flats of Seychelles and offshore, there are not many species or environments he hasn't experienced firsthand.