In order to catch more carp than ever, it is key to understand their feeding behaviors. Once you understand a carp’s appetite (or any fish species for that matter) you can begin to tailor your fishing tactics around them and, hopefully, be more successful at catching them.

A topic that often comes up in carp angling is whether carp eat other fish in their environment.

We all know that carp have an insatiable appetite and eat a lot compared to other species as they hoover up anything that looks tasty, but do carp eat other fish? That is what we are here to find out.

Join me as I run through everything you need to know about whether carp eat fish or not, what they do eat, and the best baits to catch them with.

Do Carp Eat Other Fish?

Carp are omnivores which means they feed on both plants and animals. Their main diet consists of small aquatic insects such as nymphs and worms along with aquatic plants, mussels, and crawfish.

Carp are not a predatory species and do not actively rush around lakes and rivers hunting for smaller fish to eat. But, now and then a carp will feed on small fish, live or dead.

It is not common, and not in their nature, but it does happen.

Let’s look at it in more detail below. 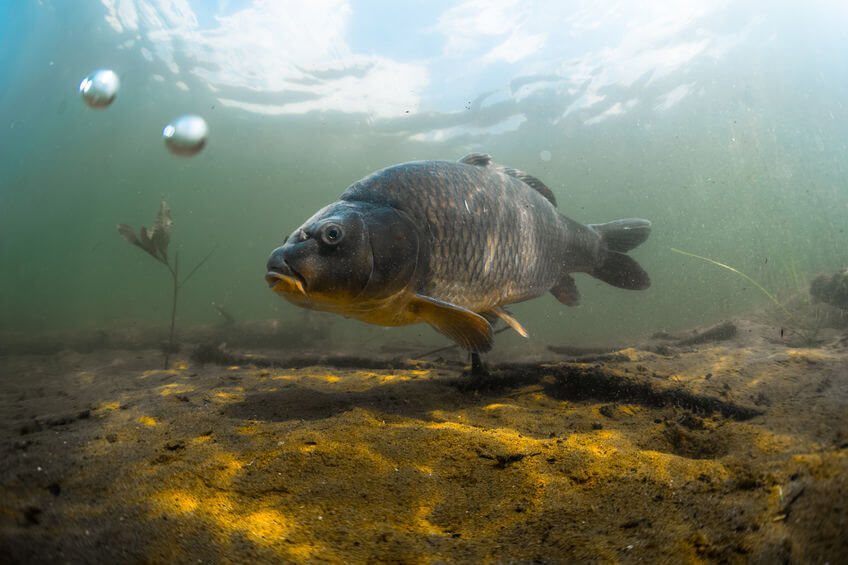 When, Why & How Do Carp Eat Smaller Fish?

Let’s get one thing straight, if a carp does happen to eat a fish, it will be a small fish of around 1-3 inches long. It will not be anything larger as their mouths won’t accommodate a bigger fish.

To understand why carp eat fish on occasion, we have to look at their general feeding behaviors. Carp are opportunistic feeders and will not pass by an easy meal, but they won’t actively hunt for one either as it is a waste of energy and not in their nature.

So, when do carp actually eat fish and how?

Carp hoover up their food and are usually scavenging on the bottom, around plants, or near to the surface when insects are hatching or high in the water column.

Carp are not the only species that will eat small insects and when a large hatch takes place, it can create a feeding frenzy for both the carp and smaller fish too. During one of these frenzies, a carp may just happen to hoover up a fish or two by mistake, but it is not intended.

While hoovering up food off the bottom, a carp will not hesitate to suck up a small dead fish that is lying in its path. It is a large dose of easy protein that requires minimal effort to catch, so it is a meal the carp cannot afford to pass by. 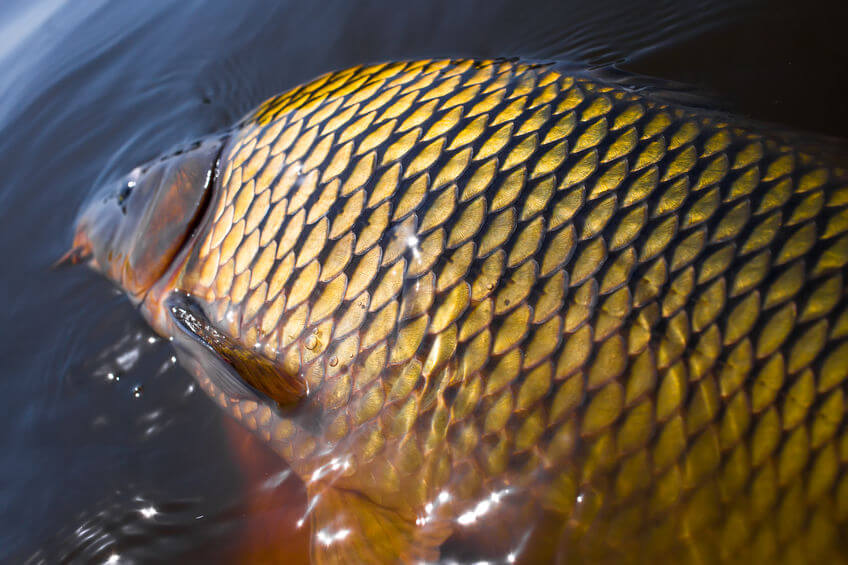 Are There Times when Carp Hunt for Small Fish?

Yes, carp will actively hunt for small fish but only when environmental factors force them to do so for survival.

Carp that live in areas where they can’t find enough of their normal nutrient sources such as plants, nymphs, worms, mussels, and crawfish will turn predatory.

This is a perfect example of a species adapting to its environment in order to survive. The carp will actively chase small fish and eat them in order to get enough food to continue to grow.

However, this is a very rare occurrence as most waters that carp live in have everything they need to survive without having to become predatory and chase smaller fish to top up their nutrients.

Yes, carp do eat fish eggs as they are an incredibly easy meal that matches their feeding behaviors perfectly.

Fish eggs are packed full of protein and are an incredibly easy meal for carp to take advantage of, so if the opportunity presents itself they will take it.

Whether carp actively look for fish eggs to eat is a question that is hard to answer. Generally, it is believed that carp only eat fish eggs if they happen to find them and do not actively pursue them.

That being said, carp living in waters without enough food to sustain them will most likely hunt for fish eggs as a means of survival since they are such an easy meal and a good source of nutrients. 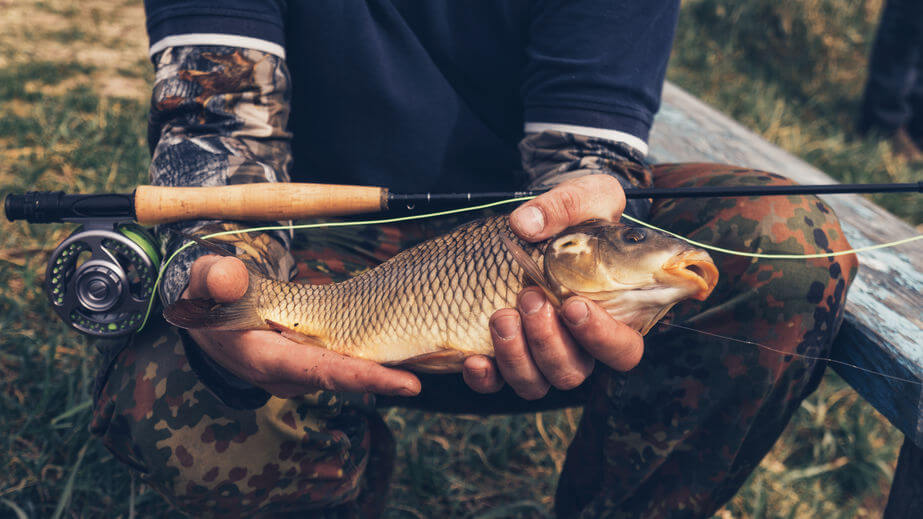 Do Carp Have Teeth?

You might have been wondering how carp eat small fish as there is no obvious sign of any teeth in their mouths when you catch them.

Carp do have teeth but they are located at the back of their throats. Their teeth are known as pharyngeal teeth and they use them to grind and break up harder food sources like mussels, snails, crawfish, and more.

When a carp does eat a fish, it will be sucked down into their pharyngeal teeth and chewed up there before being swallowed into their digestive system.

What Do Carp Eat Most Of The Time?

A carp’s diet consists mainly of aquatic plants, seeds, algae, plankton, insects, small mollusks, and decomposing food that is sitting on the bottom.

It is important to note that while carp can eat all of these things, their main source of food comes from insects and small mollusks.

A carp will eat the insect larvae of all flies, such as mayflies, which are called nymphs. Nymphs are available all year round and are found on the bottom and in the water column. When nymphs come to hatch, known as emerging, they rise to the surface and start to hatch.

If you see carp feeding near the surface, chances are they are eating emerging nymphs that are trying to hatch. Carp won’t shy away from a hatched insect either and will happily eat moths, flies, and grasshoppers should the opportunity present itself.

When it comes to mollusks, carp will eat anything they can fit in their mouths including snails, shrimps, mussels, and crawfish. They will also eat worms too. 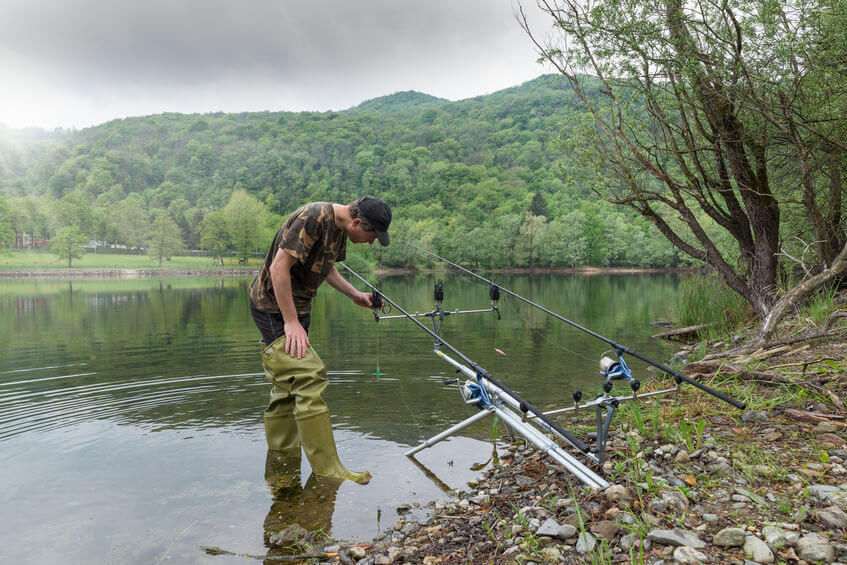 What Are The Best Baits For Carp Fishing?

Carp have an incredible sense of smell and the best baits are ones that carp like the smell of and can smell from long distances away. They also like baits that they can see easily and are bright in color.

So, what are the baits that carp love?

Sweetcorn is one of the original carp baits and it is highly effective. Being bright yellow helps carp spot sweetcorn and it is a color they are attracted to.

Sweetcorn also has a lot of smell to it and it has a great taste too which the carp are attracted to. You can use normal sweetcorn from the supermarket or buy special sweetcorn in different flavors from a tackle shop, such as pink strawberry flavored sweetcorn.

You can fish with sweetcorn on the end of your hook or by adding as a mixture to your ground-bait which you’ll throw into the water to attract them.

Boilies are probably the most popular carp bait and almost all carp anglers use them.

Boilies are small dough balls that you can either make at home or buy from a tackle shop. The dough is infused with a flavor and there are lots to choose from. Be sure to experiment with different flavors to discover what the carp like the most.

Boilies are fished on a thread at the end of your hook or directly on your hook. You can also use them as pre-bait to attract carp to your fishing spot.

Pop-ups are very similar to boilies in shape, size, and flavor. The main difference is that they float which means they sit off the bottom when you are ledgering (bottom fishing).

By sitting above all of your ground bait, the fish is naturally more curious about eating the pop-up. They are also very useful when the bottom has a lot of weed and you want your bait to be visible above it.

Pop-ups are only fishing on the hook or on a thread attached to your hook. They are not used as pre-bait as they float.

Live worms and maggots are also very effective baits for carp. When put on a hook they release a smell into the water to attract the fish. These baits also wriggle on the hook and are bright in color, which carp can not resist.

Generally, you would fish with maggots and worms on your hooks, but you can also throw maggots out around your hooked bait to attract carp into the area.

Groundbait is an essential part of successful carp fishing. Since carp are such voracious feeders, they will find a spot with a lot of food and stay there until it is all eaten.

This means you need to use ground bait to attract the carp into your area and it can be make up of quite a few different things including:

You can create your own mixture of ground bait to use, or you can buy it premade in tackle shops or online. Be sure to experiment with different mixtures to see what works best! 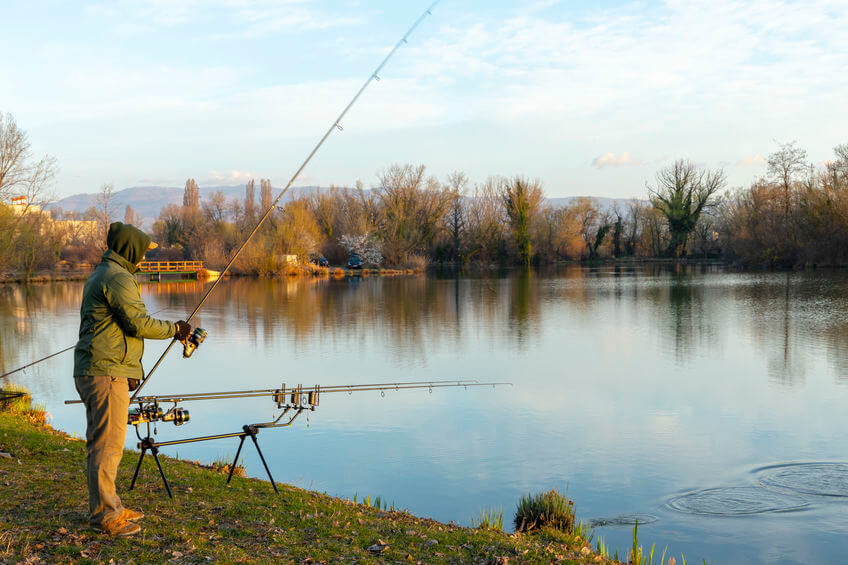 Do Koi Carp eat other fish?

If you have some koi carp in your pond at home, you may be wondering if they will eat any smaller fish species you introduce to the pond.

Like most carp, koi carp are omnivores but they are far more opportunistic and are more likely to eat small fish and fish eggs than other carp species.

Koi carp will even eat their own eggs as well as eggs of other species, and small fish too. If you do want to add other fish species to your koi carp pond, make sure they are bigger fish as koi carp will not try to eat them.

Do Grass Carp eat other fish?

Generally, grass carp will not eat fish or fish eggs. Their main diet consists of aquatic vegetation and algae, hence their name. They will also eat nymphs, snails, shrimps, and crawfish.

Like most carp species, if a grass carp comes across fish eggs or is forced due to hunger to eat small fish, they will.

Do Asian Carp eat other fish?

Koi and grass carp are both types of Asian carp and as we have mentioned, grass carp generally don’t eat small fish, while Koi carp will happily do so. It all depends on the species of carp in question.

However, most Asian carp species will not eat fish unless they are forced to by lack of food in their environment.

Overall, carp do not eat other fish on purpose but they can be forced to if there isn’t enough food for them.

Please leave us any questions below and let us know of any experiences you have had with carp eating fish, we would love to hear about it.