A lot of us who angle for catfish on a regular basis are always wondering what the best bait may be and we also from time to time wonder just good old ordinary facts about catfish.

Especially for the beginner catfish angler who is just getting started.

Learning to understand the catfish and how they behave and what they like is critical.

Catfish fishing is not overly, but it’s still important to know the basics.

A common question that comes up often is if catfish eat other fish?

I wanted to take some time in this post to answer this question.

Do catfish eat other fish?

The answer is yes. Catfish eat other fish. This can include baitfish, shad, and other small game fish. In fact, baitfish and shad can be one of the best baits you can use for catfishing to achieve optimal catch rates and keep catfish coming back for more.

Other strategies do exist to maximize results when catfishing which I also wanted to touch on briefly. Let’s cover how to use other fish, cut bait and live fish to create the perfect storm for landing trophy flathead, blue and channel catfish. 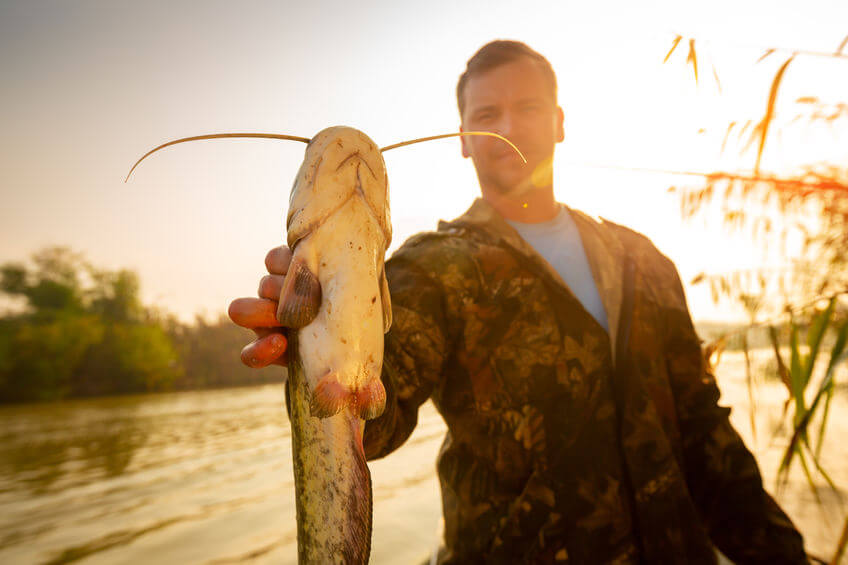 All catfish species are known to be predators and known as opportunistic feeders. Catfish will eat more than just live fish as well.

What kind of fish do catfish eat?

All the main catfish we target such as flathead, channel, blue and bullhead catfish are known to eat frogs, baitfish, crayfish, small bluegill and even some species of small or baby bass. Catfish can be considered a predator of the water.

We can also break these down a little bit further.

Here’s a more accurate look at the some of the top live fish individual species of catfish enjoy swallowing down whole and stalking.

The Three Species of Catfish And The Live Fish They Consume

Blue Catfish, enjoy a nice whole carp, drum or buffalo. Also, they enjoy perch and plenty of other live fish.

Depending on the size of the catfish can ultimately decide which size live fish they target but all in all, live fish can serve as a top bait and the primary food source for blue catfish.

Even though smaller channel catfish prefer some other baits as well such as dip baits, stink baits and punch bait doesn’t mean that you can’t land a nice size channel catfish using live fish.

Some would argue you can have better luck with fresh dead fish, but a nice size trophy channel catfish won’t be hesitant to take a live fish either.

Flathead catfish, maybe the most predator style catfish of the three.

Flathead catfish are natural predators of the water, and your luck will dramatically increase when you begin using live bait to target them in the correct locations.

Do Catfish Eat Other Fish in a Pond?

Pond owners or those us who fish ponds with any frequency may also be wondering if the catfish we have stocked, or target are eating all the other species of fish as an active food source.

Do Catfish Eat Other Fish in a Pond? Yes, catfish can also eat live fish in a pond. It’s these circumstances that have pond owners avoiding stocking any catfish except channel catfish.

Flathead catfish would be to predatory and eat many of the other species in the pond. For the most part, the channel catfish in a pond is only going to feed on tiny live fish and possibly fish eggs.

They won’t cause any significant damage to your lake except kicking up a large amount of muddy bottom water.

What do baby Catfish eat?

I’m not talking about smaller catfish then we prefer to catch. I’m referring to baby catfish. Catfish don’t start out the harsh predators swallowing other fish and live baits. Catfish when young and small start by eating algae, tiny fish and other food sources such as debris beneath the water surface.

Although they do still eat very small fish when the opportunity presents, it’s not till the catfish reach larger sizes that it becomes eating live fish and larger live fish on a more frequent/regular basis.

What do Blue Catfish and Flathead Catfish eat?

These are two of the most frequently targeted trophy catfish. They are much different than channel catfish at younger ages and smaller sizes. From early on, flathead and blue catfish are considered opportunistic predators. Simply put is, they are not picky. Any fish that they can reasonably swallow, they will eat along with other available food sources.

Any well-prepared live bait or even cut/dead fish bait will work for catching trophy blue catfish and trophy flathead catfish.

Do Catfish eat their babies?

No, catfish don’t eat their babies. It’s the opposite. After the egg-laying process, the catfish go through a period of protecting these eggs and ensuring that they reach maturity and can hatch without being attacked by other predatory fish lurking around.

This is a common concern and question that arises most frequently for pond owners trying to decide what to stock in their newly dug pond and at what quantities. Catfish do eat a majority of what they can find in a pond when it comes to insects and other debris on the pond bottom. 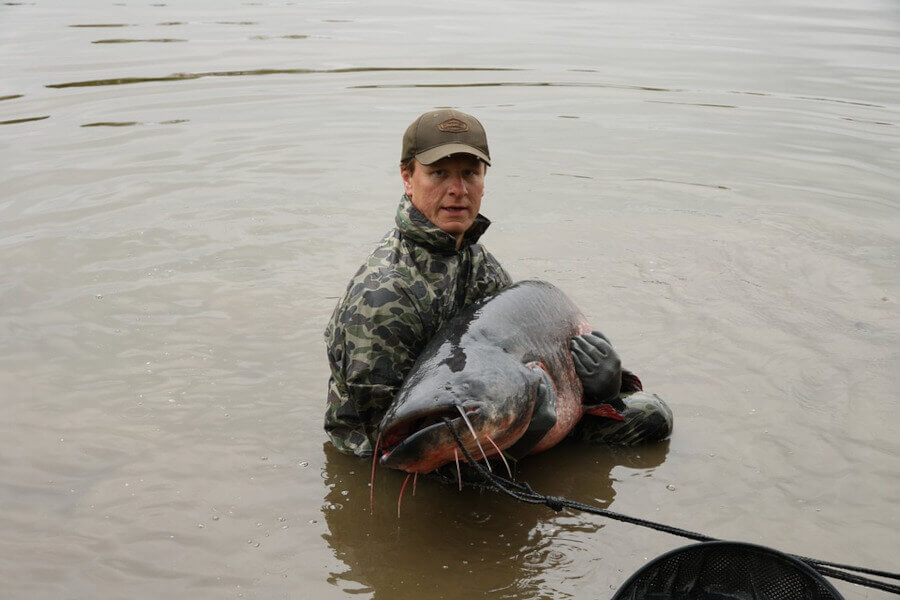 For the most part, however, catfish don’t target bass to heavily. Especially channel catfish.

Most pond owners would most likely tell you that channel catfish don’t seem to have a huge issue thriving and co-existing in the same ponds at bass.

What about when my Catfish get large? Will they eat my fish?

This is an entirely different story. When catfish begin reaching larger sizes and mature in age, then the small fish and game fish such as bass or even bluegill could become part of the farm owned channel catfish’s diet. For a pond owner, keeping tabs and understanding what’s taking place in the environment of your pond is key to staying ahead of the game.

Overall if it were me, I’d still be sure to stock channel catfish in my ponds. They make an incredible pond fish and quite the excitement each time you go out for a day of fishing.

No. Catfish won’t eat your koi, but they can pose other problems. Problems such as eating a vast majority of other available food sources. Also, catfish when it comes time to start spawning and become more aggressive.

Having the koi and catfish together may work out fine for, but you may notice your koi fish getting beat up every now and then and taking those sharp spines and fins across the body or face area. It’s usually easy to see visually. Gash marks and other physical blemishes will be noticeable on the koi fish if you begin running into this problem.

If it was me, it’s probably easiest just to keep the two fish separate and not intertwine them in the same environment, but if you already have this setup or your heart set on it, it will turn out okay, just be prepared for the items mentioned above.

So, what live fish do you plan on using now that you know catfish eat other fish?

We mentioned several viable options you can use for live bait and discussed various facts about catfish to ensure we had a deeper understanding of the way catfish behave.

Overall, what approach do you plan on taking and what live fish combination do you intend on using to land a trophy catfish this upcoming season? Be sure to drop a comment below. As always, I appreciate you and thanks for reading.

Be sure to read my guide on the best fishing vests to improve your fishing game.