It’s generally accepted that, when fishing, you should be quiet so as not to scare the fish away.

But is this absolutely necessary?

What if you could enjoy some peace and quiet and feel free to chat about what the fish are hitting, laugh, heckle your buddy, or even play some music?

In this article, we’ll look into how noises can affect your day of fishing, or if it even matters at all! We’ll look into the “hearing” system of fish and the science behind everything to see what really matters.

If you’re wanting to get straight to the point, here you go:

This is because of simple scientific reasons regarding the densities of air, water, and solid objects.

Many of us grew up being repeatedly hushed by our parents, their friends, or other adult figures while out sporting. Whether we were walking the cornfield for deer or sitting streamside in search of trout, keeping quiet was the name of the game.

One can see the beauty and appreciation for the surroundings in staying peacefully quiet. While hunting, there’s generally a need for keeping noise to a minimum.

But what about fishing?

Can fish hear you? Are they afraid of loud noises? What level of quiet is really necessary when fishing? 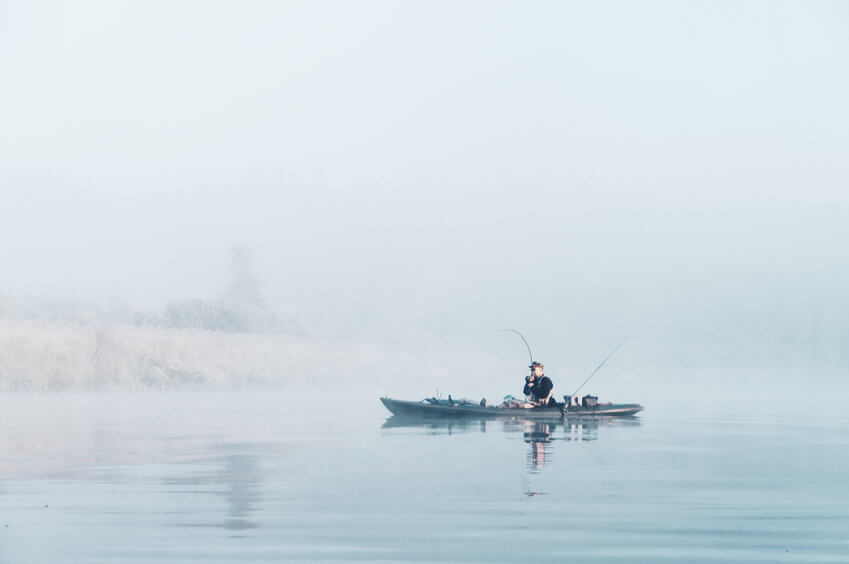 Can Fish Hear You?

The overall answer is…yes. Fish can “hear”. Fish don’t necessarily detect or interpret sound the way we do though. All sounds are vibrations and, for a human, when the vibration sets the eardrum into motion, we hear a sound.

For fish, “sound” happens in a few ways:

It is important to note that fish’s bodies are nearly the same density as water. A sound that travels through water will travel through fish and be interpreted as “sound.” 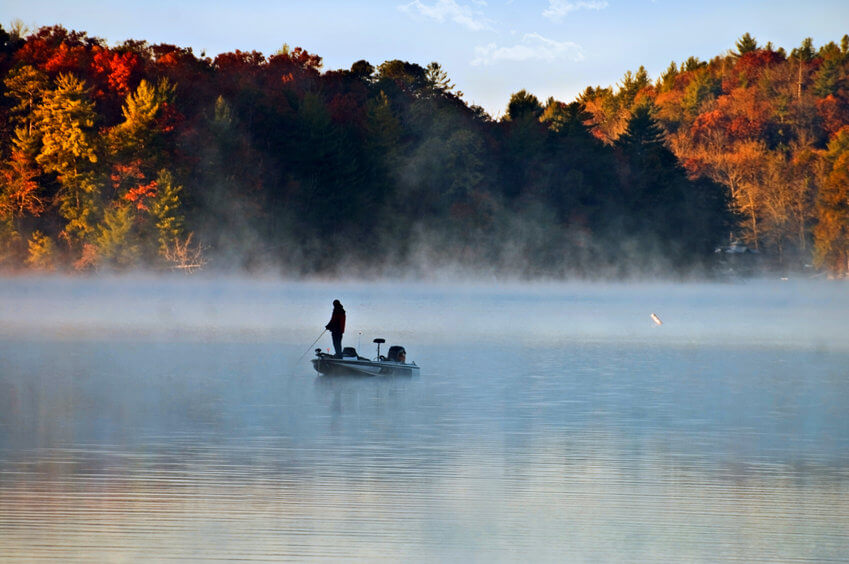 What Kinds of Sounds Can Fish Actually Hear?

The Science of it

To figure out what sounds a fish can hear or feel and what sounds might scare fish away, we must first look scientifically at the air, water, and sound waves.

What does this all mean?

When fishing, you’re obviously dealing with both air and water. Solids like boats and rocks can come into play as well. What noises you’re dealing with, where they originate, and how loud they are are all determining factors when understanding how noise impacts fishing. 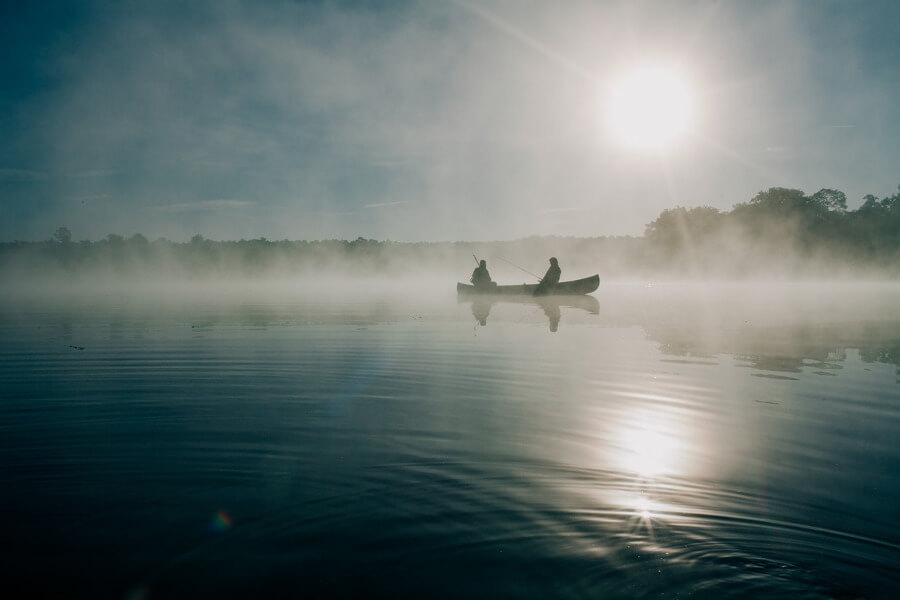 Common Noises when Fishing and Their Effects

What are the most common noises you’ll make or incur when fishing?

The most common complaint I hear regarding noise and fishing is: loud voices or music scaring away fish.

But what’s the real story?

Noises Above the Water

Let’s look at an example. Your buddy is talking loudly or shouting and you’re afraid he’s scaring the fish away. Heck, you can even hear the two people across the bay talking to each other and they’re not even shouting!

Well, that’s because the water’s surface amplifies the sounds in the air! Remember, water is denser than air. So sounds originating in the air will hit the “harder” surface of the water and be redirected toward you, back up/around, and not down into the water. This carries the sound further/amplifies our voices over water.

Those sounds… whether talking, shouting, or annoyingly loud music… don’t transfer well from air to water. So that same loud noise will be highly muffled underwater and could even be completely lost because of ambient water noises (waves, riffles, etc).

This doesn’t mean you won’t be annoyed by loud people intruding on your peace and quiet but at least most fish won’t be greatly disturbed.

Fly fishermen or those fishing closer to themselves may want to be at least a little cautious, however. Especially if a fish is in shallow, still water or near the surface. Again, most air-originating sounds will be deflected by the water but some loud noises may penetrate and affect closer/shallower fish.

So, for the most part, talking (even shouting) and normal music won’t have much effect on most fish and fishing. Normal music from your phone or small Bluetooth speakers won’t be powerful enough to scare fish.

If you’re really partying and you’ve brought a subwoofer for the music, the amplified low bass produces waves that more easily travel through dense objects like solids or water. So be mindful here. 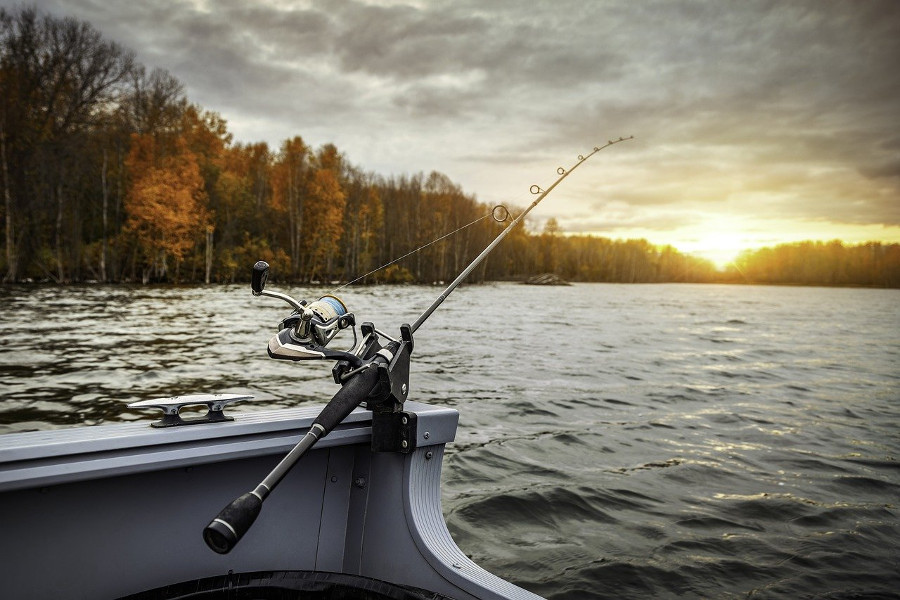 Noises in the Water

Many animals, especially ocean-dwelling mammals, know and use this to communicate over great distances.

So, if you use a waterproof speaker underneath the surface, the sound can travel quite a distance.

Rocks falling in the water from footsteps cause sound when hitting the bottom (other rocks) and water disturbances/waves that can signal fish. Water waves or ripples will travel until the energy is lost… bigger waves/splash = further travel.

Wading into the water causes water “pushing” as well which can alert fish. But this isn’t always a problem as only close fish will be alerted to the push.

Also, ambient water noises are normal. Other animals like deer, cattle, ducks, etc often push and splash water too. Fish can become used to some of these noises and many times they will be drowned out in the ambient water noise anyway. 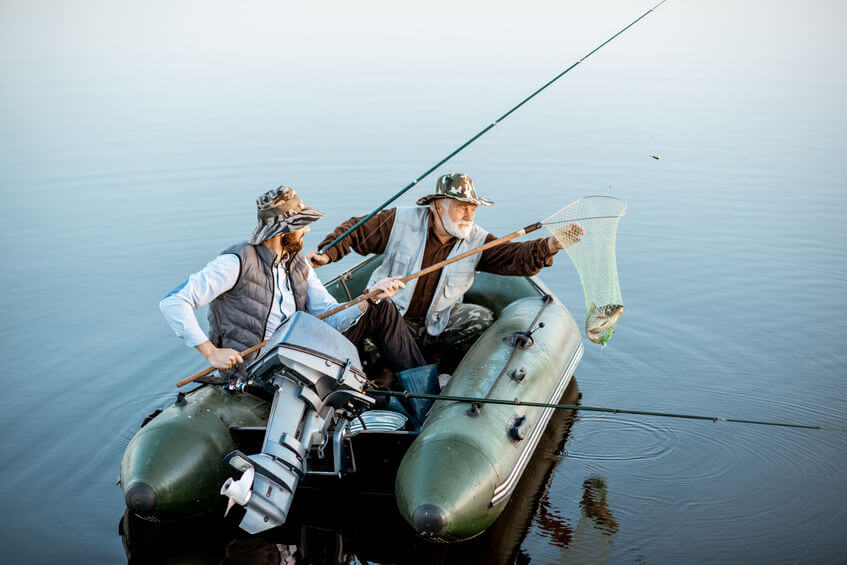 What About the Boat Noises?

Boat noises fall in both categories of above water and in water since it’s a solid object connecting the air and water. It’s technically “above” the water but the weight of the boat pushes it down into the water at some depth relative to the boat’s weight.

A “thump” from inside the boat, say a foot stomp or dropping a rod, reel, or another hard object in the boat can send sound out through the water in all directions and for some distance!

Other boat sounds can radiate sound out a long way as well. Motors cause a bit of disturbance in general. The engine is usually above the water but is projecting into the water. Engine noise is well translated into the water.

Think about your lure in the water. There are a few factors that help make it more attractive to fish. There are colors and motion built into your lure, of course. But there’s also the water sound your lure makes as it “pushes” the water around it, making it wiggle or spin the blade. Also, some manufacturers build actual rattle noises into the lure which brings in curious fish from afar.

So even smaller noises originating in the water can travel well through the water.

Quieter is usually a safer bet, especially when close-range fishing and where stealth is concerned.

Learning what we did above, we now know how sound travels through air (gas), water (liquids), rocks, and your boat (solids).

We also know now that where the sound originates is a determining factor in how it might affect the fishing, if at all.

Next time someone wants to gab, shout, play some music, or shuffle around in the boat, you’ll know if and how you might affect the fish.

Heck, some fishermen and women swear that certain sounds attract the fish! There is some scientific evidence supporting this for specific species. But if you don’t know what sounds and what species, you’re better off practicing some caution. 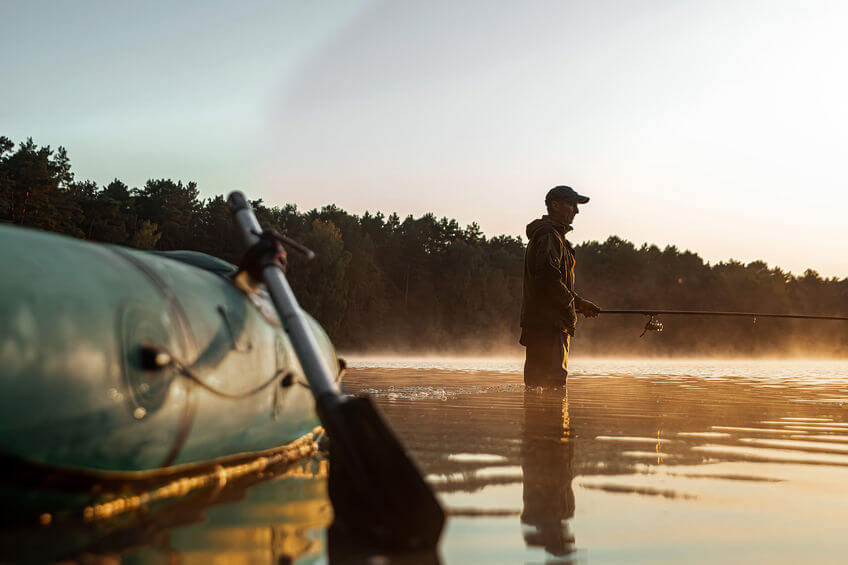 Can fish hear you?

Fish don’t exactly hear like humans but, through an “inner ear” system (otoliths), the lateral line system, and sometimes even the air bladder, fish can sense sound vibrations in the water.

Do you need to be quiet when fishing?

Generally speaking, when it comes to talking or music (aside from loud bass), no you don’t. Sounds originating in the water are what you want to look out for.

Will my voice scare fish away?

Human voices don’t produce a wave strong enough to be heard by most fish. Water’s surface reflects most of these sound waves and, the mildly penetrating waves are usually drowned out by ambient water sounds anyway.

Will music scare fish away?

Music played on a phone or small Bluetooth speaker won’t generally scare fish. The same as human voices. Deep bass can travel much better, however.

And remember, if your speakers are attached to your boat, the sound can be carried better via the boat and transmitted into the water.

Does your boat scare the fish?

Your boat is a solid and transmits noises into the water much better than your human voice. Motors, propellers, and dropping/banging items in the boat can transmit into the water.

Can fish hear a fish finder/sonar?

The sound level (hertz) of the sonar is too high for fish to detect. However, the transducer can push water or create ripples that can be detected.

Fish can definitely detect sound in the water. Their sensitive organs feel the sound waves and alert them to changes or dangers around them.

But where the sound comes from and what type of sound is a major determining factor.