“Is Fly fishing dangerous or not”, Generally speaking, fly fishing is about as safe of a sport as you could get; it is fairly safe for people of all ages. There are a few things to consider.

First of all, we should understand what is Fly fishing. Fly Fishing is a method in which an artificial “fly” is used to catch fish. The fly is cast by using a fly rod, reel, and a weighted line. Casting an almost weightless fly or “lure” requires casting techniques significantly different from other forms of casting.

Fly fishermen use mostly hand tied flies that resemble natural invertebrates, baitfish, other food organisms, to get the fish to strike. Fly Fishing can be done in both fresh water and salt water.

I think now you understand what Fly fishing is. Knowing this question is “Is Fly fishing dangerous or not”.

Generally speaking, fly-fishing is about as peaceable a sport as you can get. It is fairly safe for all ages of people. For some of these reasons, it is hard to talk seriously about the dangers of fly-fishing. But then again our sport is awash with dangers. The first is from the water itself.

Most of them are more embarrassing than life-threatening to most fishermen. Then there are a few that are hilarious to there friends or other fishermen who happen to see it.

There are many anglers that have slipped or fallen while fishing. They might hit their head as they fall and become unconscious. There are many fishermen that could have had their waders fill up and drown.

Or maybe not be able to ever get their footing back and drift downstream until they are exhausted. When this happens a few anglers have not had the strength to get out and perish. Most of the time this is very uncommon for someone to perish from this.

There are a few anglers that have been bank fishing and had the bank caved in. They don’t even have to be fly fishermen it can happen to anyone even picnickers or sightseers.

Due to which there are many funny and common accidents have taken place. Here we will discuss few of them which I have seen all along away.

Tackle by can also bring dangers and after a recent encounter with a fellow angler and his gold-headed nymphs. I’m seriously considering wearing a motorcycle helmet and goggles for next season.

There have been many fly fishermen that have had a fly stuck in themselves, myself included. I joked about wearing a helmet above but I always wear a hat to protect my head.

My brother in law always wears a buff to protect his neck and ears as they come in different colors. I have seen bass fishermen hook themselves with a 6-inch plug and they had to cut off the hook.

One day I was talking to a guy and he was talking about a fisherman who had hooked a big Muskie. He said it came right into the boat and it started thrashing around spilled the tackle box.

Then it hooked itself with several other lures and also hooked two other fishermen. He said that some were hooked so bad they had to go to the hospital to get them removed.

Most of the instances like these are serious but not life-threatening. 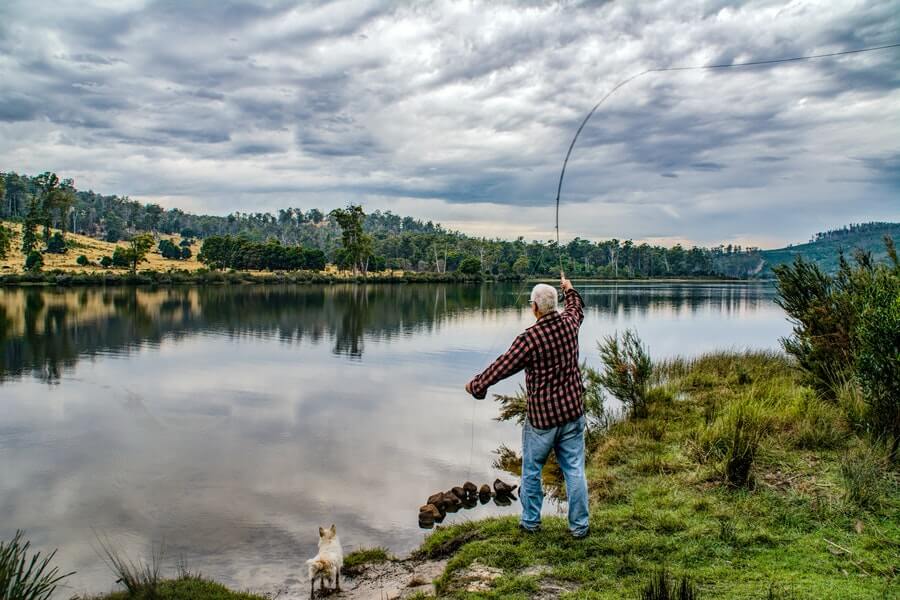 I have been stream fishing and came upon a big wasps nest hanging in a tree limb over the stream. When I tried to go around it the wasps came after me and I changed my mind and left. I was only stung four times before I got away from them if you see them leave them alone.

These can be vindictive, one wasp is no real problem, just take off your hat and beat it to death. If there are two or three wasps walk quickly away. If you happen to come across a swarm run quickly away, if they follow jump into the river. Remember to keep your head under water until they’ve gone, 15 minutes should be long enough.

There are also peoples dogs and farm animals that might be next to the stream or creek you are fishing. Some streams run right through some farmland and they might have dogs or other animals that are mean.

A friend told me this funny story and I thought I would share it here are his words.

Other Things That Are Dangerous

There are several different types of plants that you need to be aware of.

One day last season when looking from the field into a pool which held a small school of trout. I felt hot breath on the back of my neck. I turned to find that I am face to face with an aggressive looking Hereford bull. This animal had somehow walked silently up behind me.

There wasn’t any gap in the fence between the river and me so when he started snorting and pawing the ground. I decided to run it took me through a herd of his friends I had no friends to help me. We had not gone far when a horse joined the chase with us. Fortunately, I ran into a bog and although I took gigantic strides. Every stride took me up to my knees in mud, black filth squirted all over my face.

I am thankful that the horse and the rest of the group stopped at the bog. The bull seemed to float over this mess. The bull only stopped when he saw me reach the ditch on the other side. I crawled out a pitiful, dirty and bedraggled angler. Just to watch the bull take out his vengeance on my beloved wicker creel and trample and gore my Barbour jacket. I scolded him from my side of the ditch but I’m unable to print what I shouted. He eventually ran off with his tail in the air and my jacket draped over his head.

I learned a lot from this encounter, and my advice to other anglers who fish this area is to carry a bag of stones. If the stones don’t work I suggest you become a refuge in a tree. You can probably come down after nightfall and slip quietly away. I reported this to the farmer who only laughed until his sides hurt.

He then said that if ever it happened again I should advance on the bull shouting in a frightening voice. He went on to say that if this doesn’t work, lay down and pretend to be dead. Then he assured me that bulls do not attack dead people. Not having tried this myself I cannot say that this procedure works. Or should the information be incorrect, you are obviously in the fertilizer and I can only express my regret. I also understand that an expert can judge when a bull is about to attack but I suspect that there are several experts in the cemetery.

Another way of handling a bull is to beat him with the handle of your net until he backs off. You could also grab him by the horns and wrestle him until you have him at your mercy. Here again not having tried these methods for myself, I’ am unsure if they work.

It is up to you the fisherman to decide on the action at the time, from my point of view. If unable to run I will elect the pretense of death. Even though it lacks some of the less heroic qualities of the other suggestions. For some reason, these are common in the Newbridge Fields area of the river.