The John Day River is in the northeastern part of Oregon. It is considered by many avid bass anglers’ one of the best places to fish for smallmouth in the world. The smallies on the sunny side of this state are both numerous and large.

The records through the years show that the highest numbers of bass are landed during the summer months. About 85 percent of the really big bass will be caught between March and mid-May. This is when the smaller “dinks” are inactive in cooler water.

Many people have landed bass over 20 inches or caught 100 or more bass in a single day. Occasionally I have heard of some people catching 200, but I have not seen this.

The John Day flows into the Columbia River just east of the small town of Rufus. This a community on Interstate 84 between The Dalles and Arlington.

The mouth section is caused by the dammed-up Columbia to form the John Day Arm. This area has its own fishery and has the most accessible stretch of free-flowing smallmouth water upstream. This access is roughly a four-hour drive from the Portland area.

The John Day, in ODFW’s Northeast Zone, is open for bass angling year round from the falls up to the North Fork. The area where you can fish for adipose fin-clipped steelhead also is legal all year.

Note in the regulations that there are seasonal fishing closures for some species near Tumwater Falls. The bass fishing is open in the North Fork below Indian Creek whenever steelhead fishing is open there.

Starting in the 2016 season, the ODFW removed all bag limits for bass on a river that once had a slot limit to encourage a trophy fishery for this introduced species. Many of the bass anglers will continue to practice catch and release fishing to help maintain this excellent fishery.

Consult the current Oregon Sports Fishing Regulations booklet for fishing regulations and the new rules in the John Day system.

Know Before You Go

The U.S. Bureau of Land Management (BLM) has a launch permit program on part of the John Day. For more information about the requirement and a link to get a permit online.

Remember, be sure to always check the river flow before your trip. Bass fishing is best when the river flow is under 7,000 cubic feet per second and dropping or stable.

Higher flows or a river flow that is increasing by more than 1,000 cfs per day have too much current and muddy water for good angling.

Also, the rapids near Clarno can be dangerous to boaters at any level over 5,000 cfs. Flows can increase very rapidly with the snowmelt at times during the spring.

You might want to start planning and booking spring trips for March 1. This is when the water can be in the mid-30s up into the 40s.

In the colder water, only the large breeding fish are active. The spring lunker season holds up until the water temperatures reach 52 degrees in about the middle of May.

Once that happens, the smaller fish become active and strike everything that moves, and catching the larger ones is harder to do.

Don’t bother fishing water that has any significant current. Stick to the back eddies and slow water. Bass will sometimes feed just off the current line, staying just on the slow side of the boundary and ambushing passing prey.

Smallmouth bass is present in the John Day River in good numbers. They start at the mouth of the Columbia River up to Kimberly and some beyond.

For the free-flowing section above Tumwater Falls, boaters can launch at Kimberly, Spray, Service Creek, Twickenham, and Clarno (taking out at the Cottonwood Bridge on Highway 206). Some of those stretches, like the 71 river miles between Clarno and Cottonwood, are multiple-day trips. Make sure to study your river guide to choose the appropriate drift.

Bank anglers will find the best access to the main river from where Highway 207 joins Highway 19 and on upstream. Smallmouth bass is also in the smaller North Fork. There is plenty of access there for bank anglers from the mouth up to Monument. 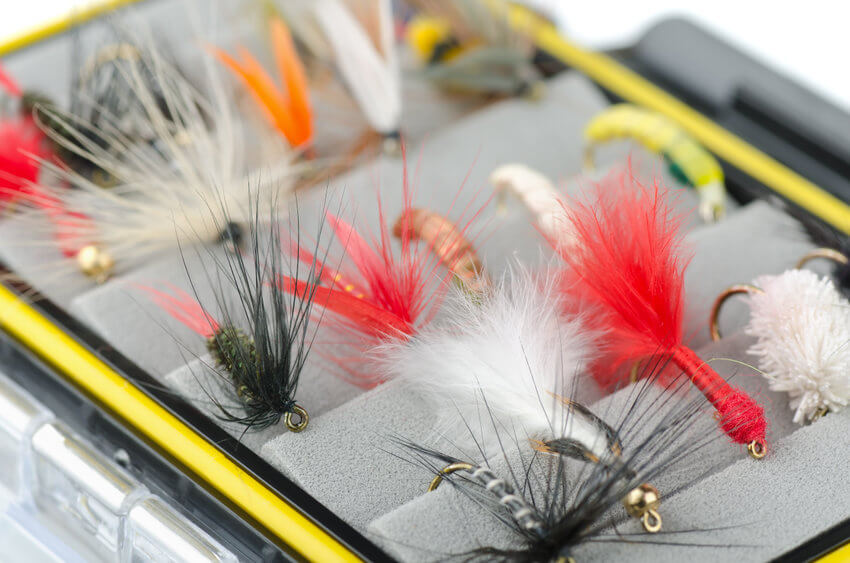 Luckily for us, the bass isn’t known for being especially selective when it comes to fly patterns. Generally, some of the same streamers or large, bushy dry flies that fool trout will fool smallmouth bass. But some patterns do work better than others.

Here is a brief list of some of the best bass flies available today. With some insight on the different pattern designs, and the presentations. There are other motives for carrying a few the next time you get the itch for smallmouth bass on the fly.

There are several different flies for us fly-fishing purists or diehards as we are known.

Bob Clouser created a minnow imitation that you retrieve with a jigging motion raised the bar for smallmouth fly anglers. Since then, it has been one of the most popular go-to patterns for bronzebacks. This fly has fooled lots of fish species worldwide and even helped some anglers break line-class world records.

The key to this fly’s success is its slender profile and weight distribution. Because the weighted dumbbell sits on top of the hook shank, the fly rides inverted and darts up and down like an injured baitfish—easy prey for bass. And though it’s available in a variety of color patterns, it’s hard to beat chartreuse and yellow.

Some fly fishermen get lost in matching and replicating everything of the natural world. Sometimes we forget that occasionally simple is better. The Black Magic can be tied in various colors to represent cicadas, hoppers or crickets. This is proof that you don’t need to tie patterns with a lot of details in order to catch fish.

Smallmouths are like all of the other basses—they love to eat terrestrial meals. That’s exactly what the Black Magic represents, without really representing anything at all.

Add small twitches to move the rubber legs and simulate a struggle. Because the fly is largely comprised of foam, it’s fairly durable and should stay on the water’s surface even after fooling lots of fish.

Aside from possibly the Clouser Minnow, there’s no other fly that’s fooled more species of fish than the Woolly Bugger. Smallmouth bass is no exception—they love ‘em.

Tied in various colors and with sparse or full hackle wraps. The crystal bugger can imitate any number of natural foods favored by smallies including leeches, hellgrammites, baitfish, and crayfish.

A Crystal Bugger is just one of the many Woolly Bugger variations. This one incorporates a few small strands of flash to the tail. Although some tiers continue the flash up the sides of the fly to the head and then wrap the hackle overtop.

While this may not seem like a big deal it can help the fly be more distinctive underwater. This is especially true if there’s other flotsam contending for a bronzeback’s attention.

If All Else Fails

Hooking up with spring smallmouth can take a different approach with slower moving lures such as soft plastics and jigs.

If you are striking immediately with each take, you probably are pulling the lure away from the fish rather than setting the hook.

When you feel a soft take, drop your rod toward the fish and count to at least one with a jig-head setup. Then lift and swing the rod to the side to set the hook.

If you keep missing, make your count longer. With some worm riggings fished in cold water, it can take a full 12 seconds for that fish to get the business end of the hook in its mouth.