The Bluegill is undoubtedly an amazing fish to target as a beginner angler as well as an expert angler. These fish give an excitingly amazing fight and are perfect for the pan!

You can generally catch Bluegill all year round but there is a window that’s best to target them! Pre-spawn and spawning season.

When do Bluegill Spawn?

Spawning season for Bluegill runs generally from April to August, but this differs depending on where you are. For those of us in the Southern part of the US, spawning starts more mid to late April whereas the more northern parts could only start spawning as late as mid-May.

It helps to note that spawning is completely reliant on the water temperature. When temperatures hit between 65-75 degrees depending on the region these are the optimal temperatures for spawning to begin.

The Bluegill is part of the Sunfish family and a lovely fish to target. These fish are fast-growing and typically live for around 10 years. The Bluegill reaches spawning maturity at around 2 years but has been known to reach maturity sooner. 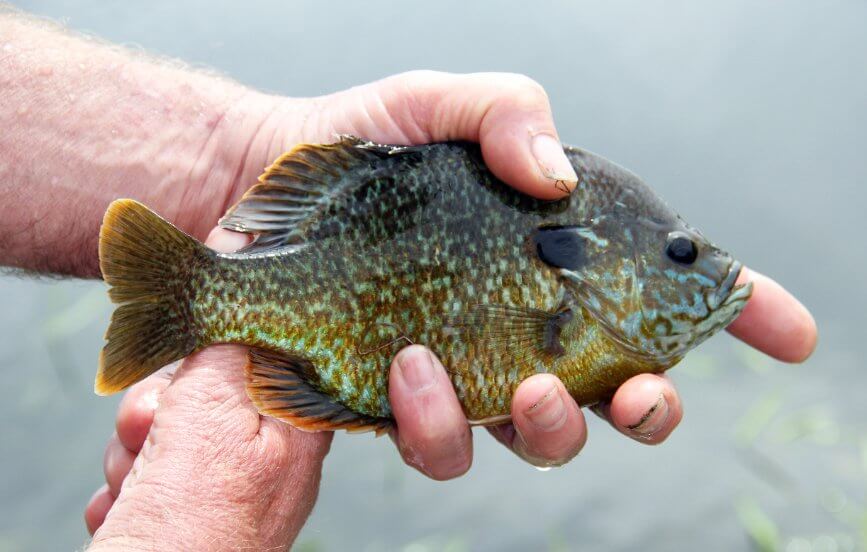 Bluegills are among the smaller selection of game fish to target. They grow to sizes of 4-9 inches (26cm) and can weigh up to 8 ounces (a quarter of a kilogram).

The Bluegill is well known for its rather small mouth and its navy blue gill flap. Their body is quite slim and streamlined with dark spots near their dorsal fin and tail fin.

They usually have dark stripes that are quite visible but this varies depending on the sex, age, and the water quality they are in. Their dorsal fins start in line with the pectoral fin just behind the navy blue spot on the hill.

What do Bluegill Eat?

Bluegill mainly feed mostly on insects. They feed on things such as snails, small crabs and crayfish, zooplankton and other fish’s eggs. Bluegill are mostly active feeding either in the dawn or dusk and feed near shallower areas.

Due to the smaller size of their mouths, it’s basically self-explanatory that you would want to use a bait that Bluegill would be more likely to go for. It would be good to remember that Bluegill starts feeding when the water temperature increases to around 50 degrees.

Where to Catch Bluegill?

As the water temperature increases the fish start to feed more aggressively so watch the temperature. Bluegill also prefer slow-moving water that is close to structures such as fallen trees or docks.

The Bluegill also hangs around aquatic vegetation but not dense vegetation. Don’t shy away from targeting these fish when there’s a bit of chop in the water. The Choppiness provides an extra feeling of security for the fish.

When does Pre-Spawn Begin?

Pre-spawn usually starts just as we are heading out of the winter. The water temperature begins to warm up and the fish start to move into shallower water.

Their feeding habitats will also start to be more erratic as the water temperature warms up.

When do Bluegill Spawn?

The Bluegill spawn starts from around Mid to late April and carries on till August depending on what state you are in. In some states, the spawn has been known to have continued until October even.

Remember this is also all dependent on water temperature. When temperatures reach between 72-79 degrees this becomes the optimal time for the female to lay their eggs and for spawning to take place.

Where and How does Spawning take Place?

The male bluegill is the one who builds the nest. The male is distinctly more colorful than the female. They move to shallower water either filled with aquatic vegetation or to areas that are plain sand. The male clears a hole in the vegetation or makes a sort of crater in the sand for the female.

When the nest is finished, then the male will look to attract the attention of a female. He does this by circling the nest and making a grunting sound repetitively. Once a female responds they then circle the nest together.

The female release some of her eggs into the nest but keeps a portion of them to release in other nests. The male then fertilizes the eggs and will stand guard for the next 6 days roughly. The nests are generally in areas that allow good lite saturation to help the eggs incubate.

The Fry (baby Bluegills) use their yolks as a source of food first for a few days and once they have grown they then move to eat smaller animals like zooplankton. The fry grows at a fast rate and as they grow so does their appetite. They will gradually target bigger prey as they grow.

The spawning time also changes for Bluegill depending on what state you are in. Below I have given you a breakdown of when Bluegill would most likely start spawning in each state. Please note that these figures are estimates.

When do Bluegill Spawn Per State?

It helps to know that the states with temperatures that have very small windows but long spawning periods most likely provide conditions in which the water temperature stays constant and doesn’t fluctuate as much as in other regions.

The reason for this is when the pressure and temperature fluctuate and affect the fish’s swim bladder, either making it swell and uncomfortable or normal size and making the fish feel comfortable enough to feed. As temperatures rise coming out of winter, the water also becomes richer with oxygen which adds to the fish’s benefit.

That is a reason for pre-spawn being such an epic time to fish for these beautiful fish. The water is getting warmer, the environment and conditions are becoming more comfortable for the fish and they are coming to breeding season. So they will feed violently, and become excessively territorial as they begin to make their nest.

When is the best time to fish for Bluegill?

Bluegill feeding habits, like most fish, rely on the water temperature. We spoke briefly earlier about this. The Bluegill starts to feed when after temperatures hit 50 degrees. That is why targeting Bluegill during its spawning season is so great. The temperatures are perfect for Bluegill to feed.

Not only are the temperatures great for feeding but the Bluegill is also incredibly territorial during this time. Bluegill females also spawn a few times during the season so target this wonderful fish throughout the season and you should have an amazing time!

Read more: The Best Time of Day to Catch Bluegill.

What is the best way to catch Bluegill?

Bluegills have small mouths and thus aren’t going to go for a massive bait. Baits such as crickets, mealworms, wax worms, or even a small piece of nightcrawler have been mentioned already as baits that work. But they need to be well presented.

With crickets and worms it’s a great idea to use a small float that allows your bait to dangle around ⅔ of the way down. You also want to fish in the right areas. Look for slow-moving water with structure. Near docks or fallen trees will be perfect.

Bluegill also goes for lures and cranks. Use small minnows with different retrieve methods. A successful method is a slow retrieve with a tug up here and there to give the minnow so fast movements to attract the fish’s attention.

What tackle to use for Bluegill?

Bluegill might not be the biggest of fish but they give a wonderful fight. Use a light to medium rod with around a 3 to 6-pound line. Take into account where you are fishing. If there are tons of rocks I would suggest a stronger line.

For those who love fly fishing, this fish is the perfect fish to target. Use a ¾ weight rod and you will have a blast when these fish take.

Let’s Wrap it up

The Bluegill spawning season is an epic time to target these fish. Bluegill generally spawn from April to October. Keep a close watch on the water temperature so that you know when the best time is to go down and throw a line.

Look for nests in the aquatic vegetations and stick close to the structure and you are sure to come right. Enjoy the thrill of catching this wonderful sunfish!

One major draw of fishing is that anglers enjoy being at one with nature. You won't get any closer when you are fishing in a float tube! You literally become part of the lake (not to mention you...

Continue Reading
link to When do Walleye Spawn? (Everything You Need to Know)

Like many fish, spawning time for walleyes is also prime fishing time. Provided you practice a little restraint to conserve their population, the walleye spawn will likely reward you with some...