Fishermen are always anxious to find out when rainbow trout spawn because there is no better time of year than spawning season for fishermen, both novice and experienced, to take to the streams and rivers.

Spawning season is an exciting time to catch these fish because they are often aggressive and feed heavily in preparation for depositing eggs.

But when do rainbow trout spawn? And what else should you know about this process? Read on to find out…

When fish deposit eggs into water it is what is known as the reproductive process of spawning. The factors that affect rainbow trout spawning include water temperature, stream flow, oxygen level, and the river bottom. 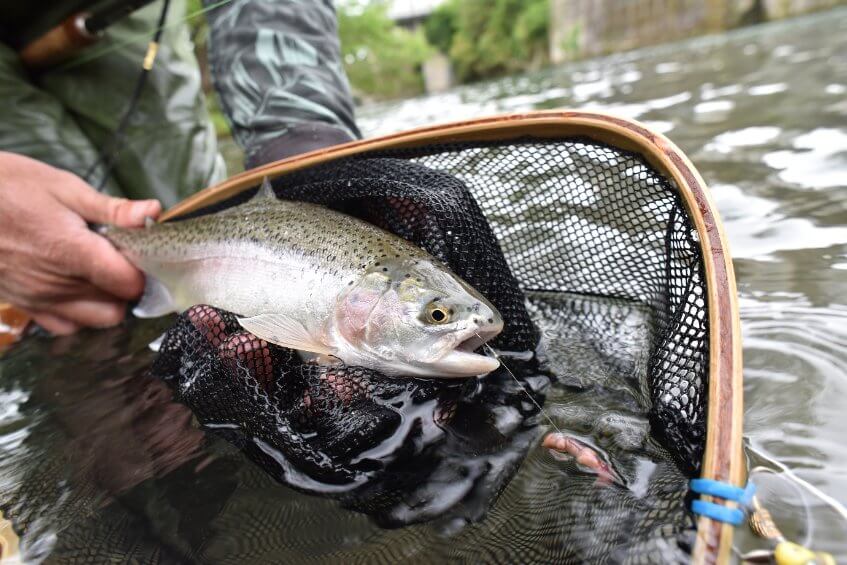 What Temperature do Rainbow Trout Spawn at

The ideal rainbow trout spawning temperature tends to range from a water temperature of 42°F (6°C) to 52°F (12°C). This range is key to the start of the spawn, with the eggs hatching in about three weeks.

The water temperature is key is what initiates rainbow trout spawning season. Usually, the water level has to rise slightly before the fish start to spawn. The trout wait for several weeks after eggs are fertilized to leave the Redd and vacate the nest.

How does Stream Flow Affect Spawning

Rainbow trout are migratory fish and they will travel long distances to find the correct stream flow conditions for spawning.

The stream flow that they tend to prefer is one that has a moderate to fast current with a lot of oxygenated water. This helps to speed up the spawning process and ensures that the eggs hatch quickly and successfully.

A trout stream’s flow is important to consider when trout fishing because different flows will affect the way a trout feeds. In addition, trout spawning behavior is also affected by the flow of the water.

Spawning typically occurs in areas of moderate current velocity, where the eggs can be carried downstream and keep from sticking to rocks on the bottom of the stream. 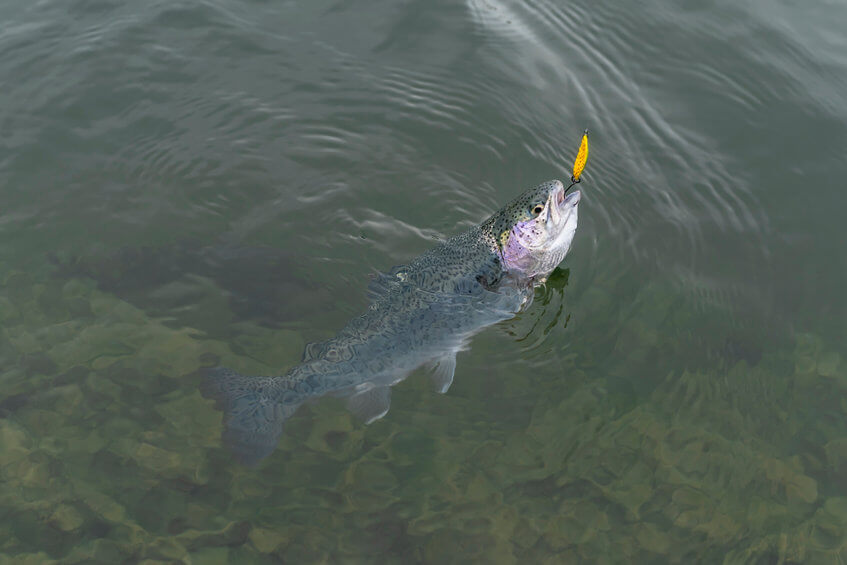 What is the Ideal Oxygen Level for Rainbow Trout When Spawning

The ideal oxygen level for rainbow trout spawning is 6-8 ppm (parts per million). Spawning usually occurs in the early morning when water temperatures are ideal.

The spawning habitat is typically found in riffles with moderate to fast current speeds and a gravel or cobblestone bottom. Spawning occurs over a period of several days, with eggs being deposited in redds (nests) that the female creates by turning on her side and digging with her tail.

The female then maneuvers her body upstream of the redd and expels her eggs. As many as 2000 eggs can be released in one spawning event.

The male fertilizes the eggs externally, he also usually guards against any activity around the nest until the eggs hatch. After hatching, the alevin remains in the Redd for several days before swimming downstream to find food.

Do Rainbow Trout Spawn in the River Bottom

The REDD is usually located in a riffle, which is a fast-flowing section of the river with boulders and rocks lying on the bottom. The trout use these rocks to clean and prepare the nest for the eggs.

Rainbow trout spawn on the river bottom. They use their fins to clean out an area for their eggs. The eggs tend to cling to any rocks in the nest. The male usually guards the eggs until they hatch. 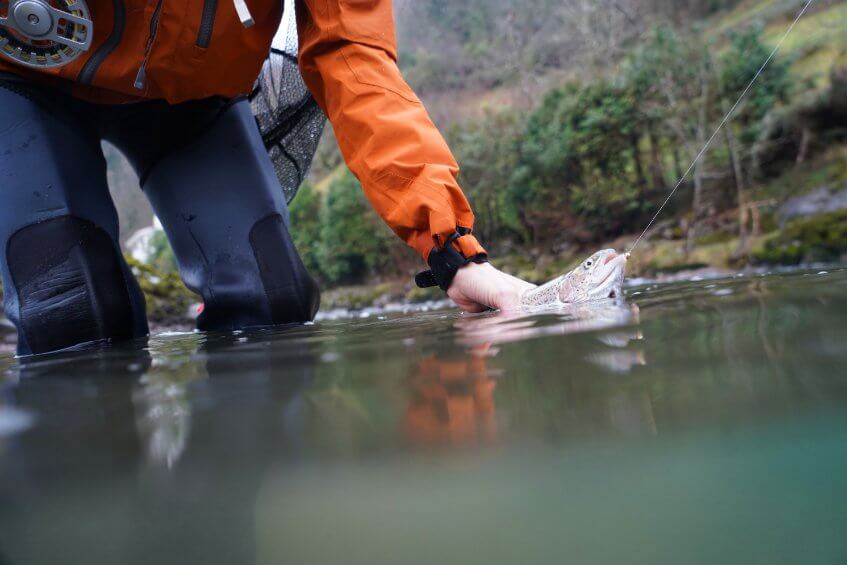 A common question from state to state is when rainbow trout spawn.

Each state has slightly different spawning schedules and nuances that we have highlighted. Generally, rainbow trout spawn in the late winter or early spring and are mainly native to states in the western part of the country. 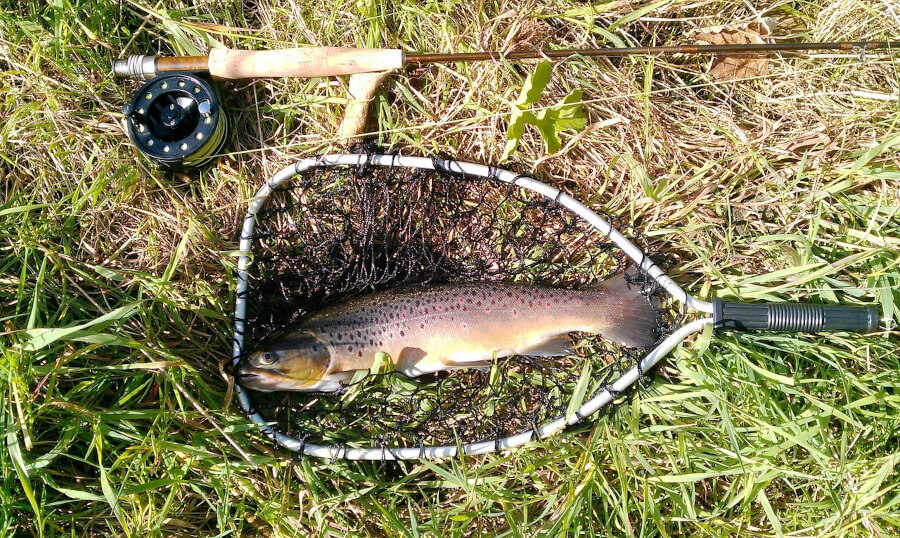 The Best Techniques for Fishing During Spawning Season

When fishing for rainbow trout during spawning season, it’s important to focus on areas of the river that aren’t near the redds.

Fish deep in the water, on the edges of the river, and in sections away from the spawning fish. This will help you avoid catching trout that are actively reproducing, and give them a chance to do their thing.

Casting your line into a deep pool or along a rocky shore can be a great way to catch some quality rainbows during the spawning season.

Do not fish in the mouth areas during the spawning season and try not to fish in the bodies of water where spawning actually occurs.

When you are fishing in bodies of water without outlets or inlets, if they are stocked with rainbow trout they will usually spawn in the gravel or rocky areas in the most shallow parts.

During the spawning season, it is important to provide a healthy environment for the eggs and fry by minimizing angler disturbance and keeping the water clean.

How do You Spot a Spawning Trout?

Spawning trout can be easily identified by their reddish-orange coloring. They will also be very aggressive and may attack anything that is near them. Spawning typically occurs in the early morning or late evening hours.

There is a lot written about what is the best fly for rainbow trout. Many factors go into it, but given the time of year and conditions trout tend to spawn in, there are a few obvious choices.

I would recommend any or all of the Indicator Kilinkhammer, the Griffiths Gnat, Quick Sight Foam Ant, Adams Parachute, the Doculator, or the Baby Fat Minnow.

Each has its positives but all should be successful. It is important to use a fly that you are comfortable with and that you can grow to like.

There is no definitive answer to the best bait for rainbow trout. However, many anglers have found success using live bait such as minnows, nightcrawlers, and salmon eggs.

Other fishermen prefer to use artificial lures such as spinners and plastic worms. The key is to experiment until you find what works best for you in your area.

The best lures for rainbow trout is another highly debated topic.

Spinners are a top choice for rainbow trout, as they can be worked effectively both near the surface and down deep. Some of the most popular spinners for trout include Mepps Aglia, Panther Martin, and Blue Fox Vibrax.

Spoons can also be deadly on trout, with favorites including the Silver Rat, Little Cleo, and Krocodile spoon.

Jigs are another great choice for trout, with options such as the 1/16th-ounce Gopher jig being a good starting point.

Finally, plugs are arguably the most versatile lures for rainbow trout, with a wide variety of shapes and sizes that can be effective in both rivers and lakes. 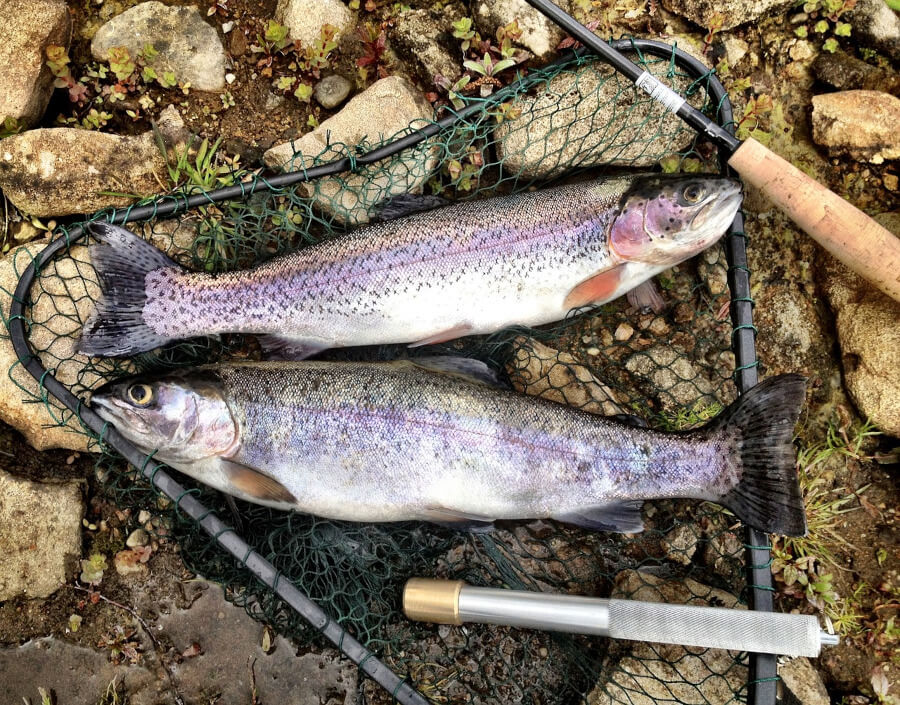 There are a lot of common questions that often come up when discussing rainbow trout and their spawning patterns. I have answered a few of the most frequent questions below.

How many eggs do rainbow trout lay?

Rainbow trout can typically lay anywhere from 20,000 to 80,000 eggs. It takes 20-80 days for the development of the embryos, usually variant on the water temperature, before hatching into alevins. These free-swimming embryos spend another 2-3 weeks down in the gravel while their fins develop.

What is the best time to catch rainbow trout?

The best time to catch rainbow trout, especially in a river, is usually early morning or evening when they are feeding the most. However, you can catch them at any time of the day.

Rainbow trout are a popular sport fish and can be caught in many different ways. However, the best season to catch rainbow trout is the spring, when water temperatures are moderate and they are more active. In the fall, the fish tend to move to deeper waters, making them harder to catch.

How long does spawning last for rainbow trout?

Spawning can last up to two months for rainbow trout. They will typically lay their eggs in a gravelly area near the water’s edge. The male will then guard the eggs until they hatch.

Can you catch rainbow trout during spawning season?

Yes, you can catch rainbow trout during the spawning season. They can be caught along the edge of the riverbed, in deep pots, under banks, and in parts of the water not near the redds. However, it is important to remember to leave the spawning trout the chance to reproduce.

If you’re looking to get into rainbow trout fishing, it’s important to know when and where they spawn. This comprehensive guide has all the information you need on spawning in different locations – now all that’s left is getting out there and trying your luck!

Please leave any thoughts or questions that you have below in the comment section!