Like many fish, spawning time for walleyes is also prime fishing time.

Provided you practice a little restraint to conserve their population, the walleye spawn will likely reward you with some easy catches. But for this to happen, you need to understand the conditions that walleyes need for spawning, and consequently when and where you can find them.

We’re going to look at walleyes and their spawning habits in a bit more detail, as well as provide some useful tips on bait and timing by state.

When does Walleye spawning start?

Spawning generally starts when temperatures reach between 40-50 degrees Fahrenheit. In most places, the walleye spawn starts in mid to late March and ends around the middle of May.

Walleyes have long, cylindrical bodies with two dorsal fins. The second dorsal fin has spots on it and is closer to the tail fin, while the anul fin and the pelvic fins are normally clear. They have olive-yellow coloring with several black bands on their backs and white undersides.

Walleyes grow on average to one to two pounds in most lakes but have been known to grow to around ten pounds, with one record breaker even reaching 25.

They have canine teeth which indicates their predatory nature, and large pearlescent eyes which help them to see well in low light conditions. 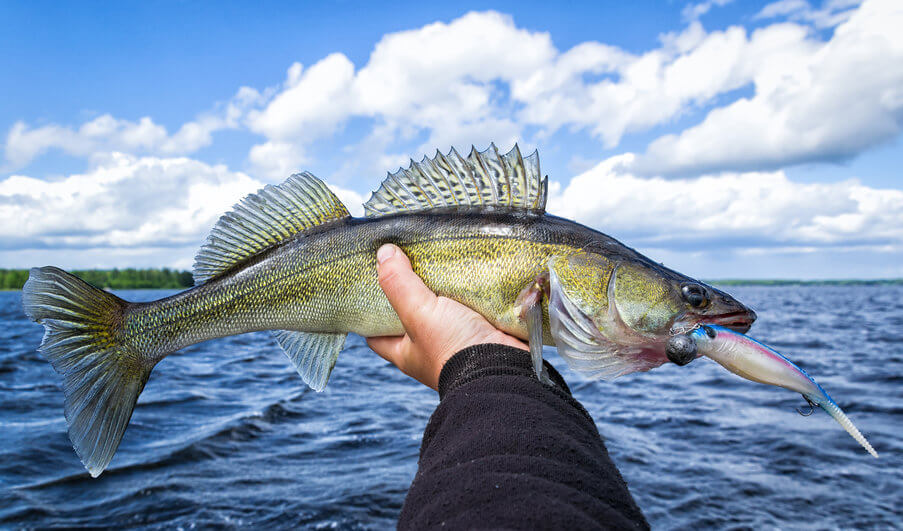 Where can I Find Walleyes?

The walleye is native to Minnesota but has been introduced to rivers, lakes, and reservoirs across the U.S. and some parts of Canada. Now they can be found in lakes of all sizes, and are also commonly found in large rivers with gravel beds.

They like cooler water which makes lakes such as Lake of the Woods in Minnesota, Lake Winnebago in Wisconsin, Devils Lake in North Dakota, and the Detroit River in Michigan a popular hang-out.

What do Walleyes Feed on?

Walleyes are carnivores and feed exclusively on other aquatic life forms. Their prey naturally changes as they grow and are capable of eating larger fish.

Juvenile walleye feed on zooplankton, moving on to larger fish such as yellow perch as they grow. However, they are opportunistic feeders who will give anything a go, also consuming aquatic insects and crustaceans such as small crayfish and snails.

Their good eyesight allows them to remain active into the evening, hunting other species that are active at this time too. When does spawning start?

In most places, the walleye spawn starts in mid to late March and ends around the middle of May.

Spawning generally starts when temperatures reach between 40-50 degrees Fahrenheit. This means that spawning starts a little earlier further south, and a little later the further north you go.

However, as spawning is dependent on several conditions, including photoperiod and temperature, weather variations can influence the timing.

In Ontario, the walleye spawn typically starts in late April and ends around mid-May but can on occasion be delayed until June.

Spawning in Missouri typically starts in late March and while in Alabama it starts in mid-March. Both states end in early April.

Pre-spawn is basically the period during which fish travel from their winter hangouts to their spawning locations. The pre-spawn period is a great time to target walleyes as they are actively hunting, a little more aggressive, and on the move.

Pre-spawn could start as early as mid to late February depending on the region. Further north, pre-spawn will take place nearer March. In places like New York, Michigan and Wisconsin it takes place later still in April, and in Canada, it can be as late as June.

The factors that largely affect the pre-spawn are water temperature and the photoperiod, or day length.

As temperatures and day length start to increase and winter transitions to spring, the fish become more active.

However, it’s well known that walleyes are fans of moving water, so another factor in pre-spawn movements can be this migration towards faster-moving rivers or streams. 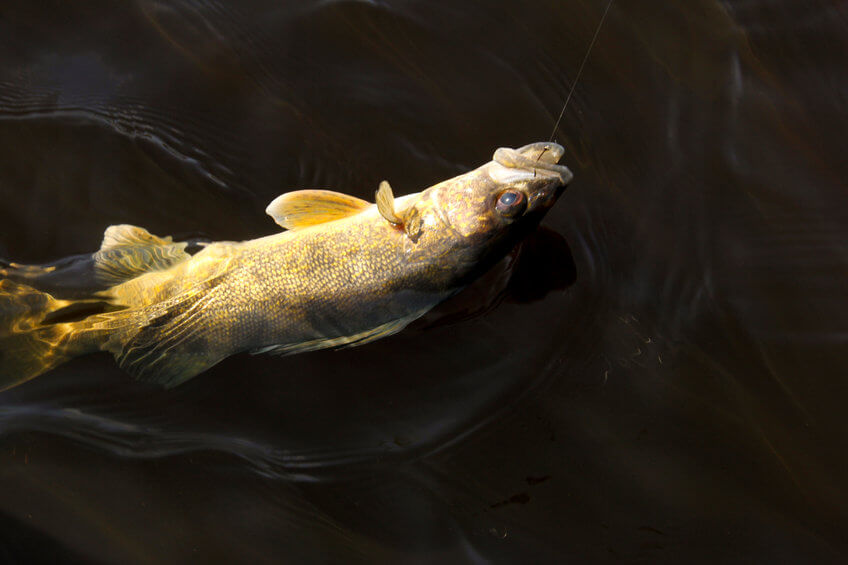 Where do Walleyes Spawn?

As well as having a preference for faster currents, walleyes prefer to spawn in areas of shallow water with plenty of rocks and gravel. The females lay their eggs in the cracks between rocks and on the gravel.

And when we say shallow water, we do really mean shallow as well. Walleyes can often be found in water just a few feet deep.

The females will remain in deeper water until temperatures are right for spawning, while the males start to move into the areas while the water is still colder.

As the walleye is nocturnal, most of their spawning activities will take place in the evening. The female lays on average 80000 to 100000 eggs per season and will only spawn once per season.

The photoperiod is the response living organisms have to the changes in day length from one season to another. As days get longer we usually see temperatures get warmer and thus fish become either more or less active.

The photoperiod also has an impact on certain species that are usually nocturnal. As nights get shorter the times fish feed will change.

The same is applied when fish spawn. As the photoperiod changes for different areas, so do the conditions that would encourage spawning.

How do Temperatures Affect Things?

Factors like rain, snowmelt, wind, and water currents can all influence water temperatures. For example, wind can push the warmer or cooler water into different parts of a lake, and currents can create pockets of water in coves or corners that have a different temperature from the rest of the lake. 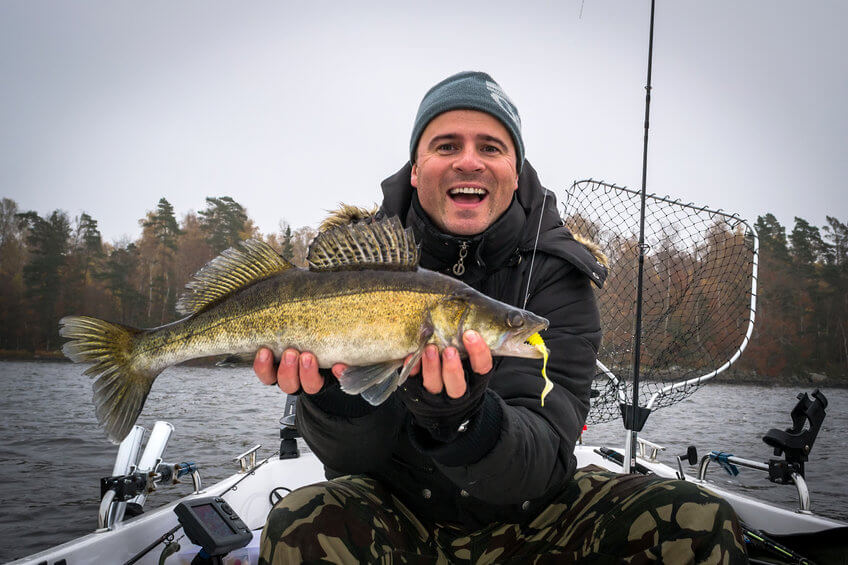 How to Catch Walleyes

The easiest way to catch a walleye largely comes down to choosing the right bait or lure. Remember, walleyes are voracious predators that have great eyesight, so using bait that is bright and attractive is a great way to catch them.

Walleyes also have taste buds on their face and lips so be sure to choose bait that is fresh and tasty when using live bait.

Trolling with live bait or lures is self-explanatory. You want the bait to swim at the right depth – the same depth that walleye swim.

Choosing where to fish is also important. Like most fish, walleyes prefer structures, rocks and gravel.

A good example of where to fish would be near a variation in the lake bed where the estimated depth is 3-9 feet with a sudden drop off to deeper water. In rivers and streams, look for corners with broken rock and a strong current. 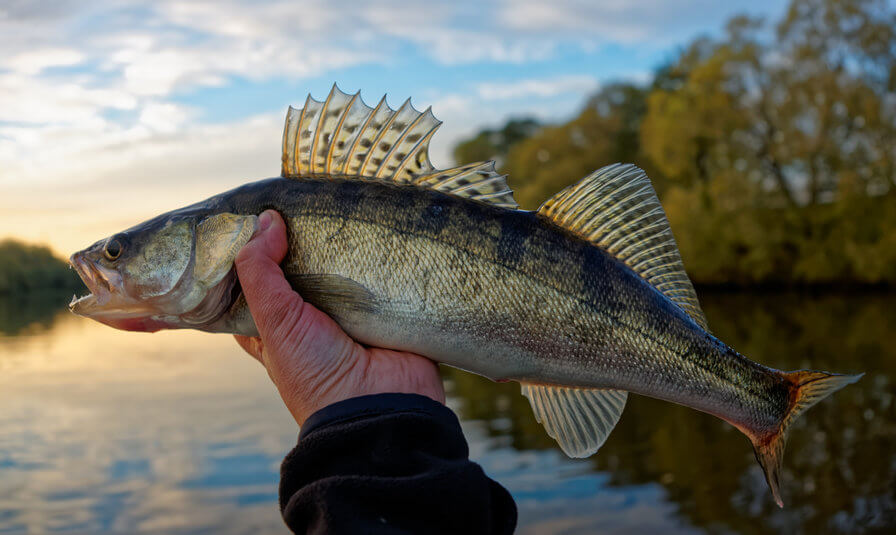 What Bait or Lures should I use for Walleyes?

Live bait such as minnows, leeches and nightcrawlers, are always a good way to go.

You also want to catch the walleye’s attention so using a bottom bounce rig can provide the movement you need. A slip sinker is also a good way of providing the right kind of action.

Alternatively, if you prefer fishing with lures, there are a few things to think about.

The brighter the lure, the easier it will be to attract the walleye. Use Medium to large lures and make sure you use treble hooks to secure your catch.

The Bandit Walleye Minnow Jerkbait is a great lure to use – it has bright colors and great dive actions to it. Another good option is the Storm Original Hot n Tot Fishing Lure which is the spitting image of a walleye bait fish.

When trolling you want your lure to swim deeply and stay there consistently. Unfortunately when the boat is moving most lures usually move to the surface.

This could be similar to the live bait mentioned above. The lures need to swim at a depth of around two-thirds of the way to the lake floor.

Ask any passionate angler, walleyes are amazing fish to catch! They are incredibly strong and provide a very enjoyable fight! And, when the spawning season comes around it gets even better!

From Mid-February to May the walleye becomes a trophy target for many. When temperatures hit over 40 degrees Fahrenheit these beautiful fish start to feed.

Look for parts of the river that would provide good ambush points for a hunting fish and try fish in low light conditions such as early dawn or late dusk.

One major draw of fishing is that anglers enjoy being at one with nature. You won't get any closer when you are fishing in a float tube! You literally become part of the lake (not to mention you...

With their delicious taste and exhilarating fight, crappies are a popular fish to target. And, like many fish, the pre-spawn and spawning periods are particularly rewarding. But when do crappie...