Of course, most fisher-folks would agree, the possibility of landing a big, tough trophy is a major draw for muskie fishing!

The length, the mass, and the sheer power are something to behold. Muskie, along with steelhead, hold the moniker, “fish of a thousand casts,” meaning they can be hard to find. And, when you do, it can be difficult to get one to take your fly or lure!

Understanding their movements and seasonalities is key to muskie fishing success. Knowing where they will be and when helps improve your success rate dramatically. Muskie spawning is most likely the best chance to find a trophy.

In this article, we’ll focus on the question: “When do muskie spawn?”

The Short of It

Muskie (short for Muskellunge) is a large growing, North-American-native, freshwater fish. They are much less widespread compared to pike. Muskie reside mainly in the Great Lakes region of northeast US and southeast Canada. They have also been introduced throughout Appalachia all the way down to Georgia and west through the Dakotas into western Colorado.

March-May is the best time to fish with April being most commonly the month of spawning. Pre-spawn, the actual spawn, and post spawn times can all be productive. 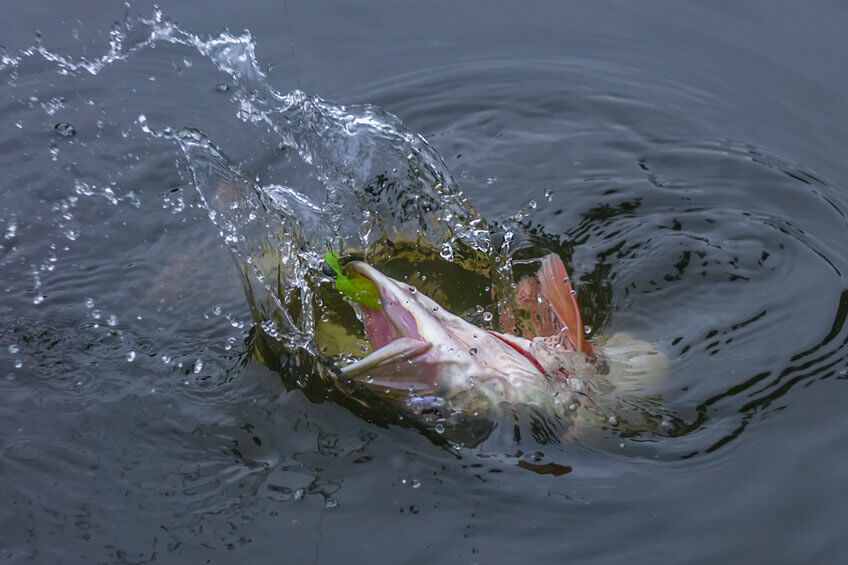 Getting to Know the Amazing Muskie

A muskie is a North American freshwater fish species that is known for its predatory behavior, growing long and fighting hard.

They are related to northern pike (aka northerns, pike) and the smaller cousin, the pickerel. They can also interbreed with northern pike, the offspring of which is the sterile tiger muskie.

Muskie tend to have a long, lean missile-like shape with long jaws full of teeth for catching prey. Because of their predatory nature, their large size and aggressiveness make them a favorite sport fish for pursuit.

Unlike pike, however, muskie don’t have an extremely wide distribution. The native range for muskie is generally the Great Lakes region of the US and Canada.

Why are They More Difficult to Catch than Other Species?

Muskie are more difficult to catch because, in most situations, there is simply a lower population of muskies especially compared to other fish species. Many population and habitat studies have been carried out and continue.

These studies suggest that an individual muskie needs a lot of habitat to roam and hunt. The food intake and space needed for a single fish is greater than most coexisting species. Some studies suggest 5 acres or more of water per adult!

Walleye, sauger, perch, other panfish, suckers, smelt, whitefish, and burbot are all key food sources for the voracious muskie.

Different fish seem to prefer different food at different times in their life. So, depending on what specific fish is preferred, the roaming habits of the musky will change some.

Muskie tend to prefer relatively shallow, still or sluggish parts of medium to large lakes and large rivers. Heavily weeded areas provide good cover to ambush prey. They generally prefer 40ft of depth or less but will cruise deeper areas if a good food source can be found.

This behavior coupled with relatively low numbers can make them difficult to find for fishers. 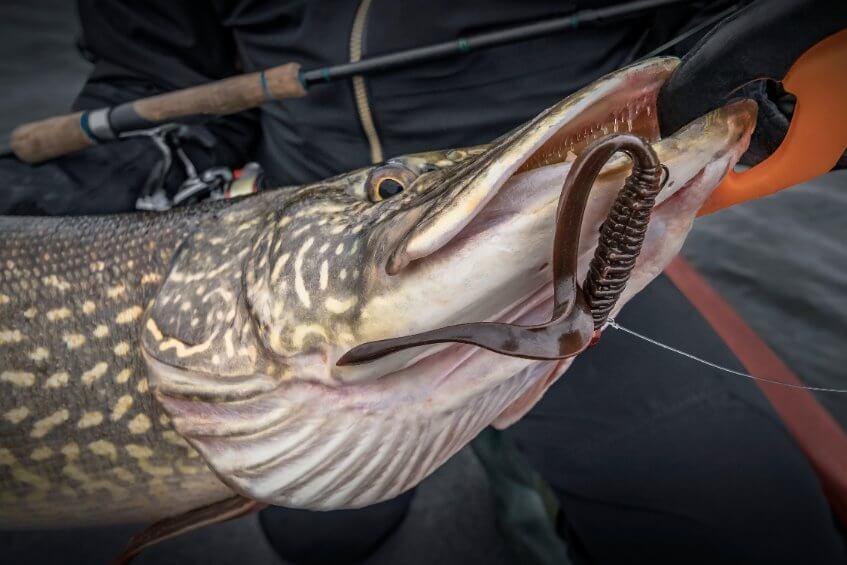 When do Muskie Spawn?

Muskie are a spring spawning species. In the south, say Texas, Georgia and even Tennessee, you’ll start to see spawning behavior as early as March.

Middle latitudes, regarding muskie distribution, will see April as the key month.

The northern reaches of the range (Canada) generally won’t see muskie spawning until May and sometimes even early June.

This makes sense when you think about the northern climate being generally cooler and warming slower going from winter to spring and summer.

Not only that, but…

A mild winter brings on an early onset of spring-like weather meaning the spawn could start earlier than usual in said area. A harsh winter can push the spawn to be later.

The key metric tends to be water temperature.

When water temps start to near and crest 50 degrees, muskies will begin moving into preferred spawning areas. These areas are generally near-shore or mid-bay areas with a depth of 2-4 feet. Heavily vegetated areas in larger bays are perfect spawning areas for muskie.

The heavily weeded or covered bays must still have a gravel, sandy or mixed bottom. If the lake bed is muddy, clay, or carpeted (covered with moss, grass, and other vegetation), it is not suitable for musky eggs.

Muskie also like to spawn in the mouths of slow-moving rivers that enter such bays. River’s with slackwater areas with vegetation cover and along marshy shorelines are perfect for river-spawning muskies.

When the water temps warm to the spawning threshold, the male muskie will enter and “scout” the shallows first. The female then follows only to deposit the eggs and return to deeper water.

The male stays to fertilize the eggs and will then leave the eggs to fend for themselves. This process takes 5-10 days.

Unlike pike eggs, muskie eggs don’t attach to the vegetation. They rest in the gravel and sand of the shallow bay or river. A female can lay 18,000 to 200,000 eggs depending on her size. A larger fish will, of course, lay more eggs.

In 6 months, the newly hatched muskie are nearly a foot in length. Most of the eggs won’t survive and fish that do hatch have to face a lot of different adversities to make it to this point. And if they do, they become targets for larger fish, even other muskies, and predatory birds. This is another reason muskies generally have a low population density.

**areas with stocked fish are still listed. Early generation stocked muskie can still reproduce. Other stocked fish may still go through the motions, even if they can’t reproduce.

Fishing muskie during the pre-spawn is one of the best times.

Before the spawn, muskie are generally spread out in deeper water making them more difficult to target. As water warms and fish move into their shallow spawning areas, the populations become more concentrated and easier to find.

Although easier to find, pre-spawn muskie may not be aggressively feeding.

They are on a mission and using “noisier” lures (lures that push or move more water than others – this makes vibrations or “noise” to the fish) may be the ticket here. You may have to try very bright or very dark variations but, since they’re not heavily feeding, you have to attempt to trigger their intrinsic aggression.

When actively spawning, muskie can be a bit more difficult to catch.

This can be frustrating since you may be seeing fish in the shallows. However, at this point, they have a singular mind… reproduction. Again, here… triggering territorial aggression is key to a take. Loud, attention-getting lures might be the key.

The female musky heads for deeper water very soon after ovipositing (depositing her eggs). She is generally not in a feeding mood and needs some rest at depth.

The male will hang out over the nest for a while longer and can be more easily targeted, however, not aggressively feeding still. Patience is key and, again, you’re trying to trigger an aggression strike.

If you catch either females or males leaving the shallows and heading back toward deeper water, there’s a good chance they’re going to grab some easy prey along the way. It isn’t always easy to time this but can be a productive method. 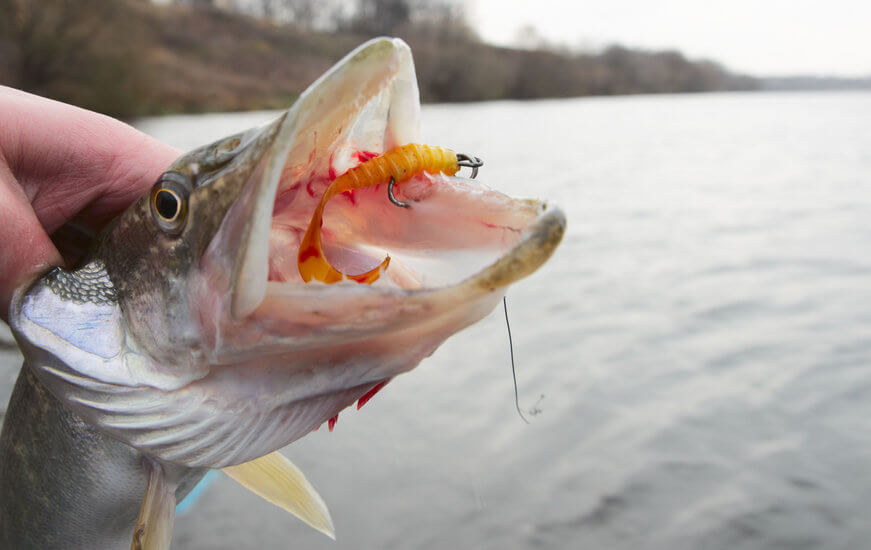 This is generally going to be a productive method but you’ll have to check local regulations. Some areas don’t allow live bait fishing.

Also, spawning muskies aren’t always actively feeding so this method, like the rest, is hit and miss.

During the spawn, you’re going for “attention getting” versus imitating natural food sources. Here’s a short list of great lures for your tackle box:

This should give you a good variety to throw. Remember, muskie are moody and often don’t pay much attention to your lures or baits. If you know the fish are there but can’t get a strike, keep changing patterns and colors.

The general rule is smaller baits, lures, or flies in the spring and cold months, and larger in the summer. However, if you’re not getting attention from spawning fish, varying your lure size is a good idea…even if this means going bigger.

Casting from a boat toward shallow spawning areas is your best bet.

Cast in toward structure (rocks/fallen trees/heavy weed bed edges) and retrieve toward you in a moderately slow retrieve. Your fly or lure shouldn’t’ “zoom” toward you but still needs to move fast enough to work the wobble, blade spin, or other built-in motion.

Figure 8 motions at the end of your retrieve (next to the boat) can help increase hookup rates. Often, pike and muskie will track (follow) your bait for some time…even all the way to the boat. You’ve run out of line to retrieve but the figure 8 keeps your lure or fly working longer and induces takes.

Check out this short video on how to do the figure 8.

If you’re not getting any takes, or at least some follows, you’ll want to change up your lure or how fast or slow you’re retrieving. Use a process of deduction to see what works best.

Don’t get frustrated! Muskie aren’t the easiest fish to target. Even seasoned anglers will tell you this. In fact, muskie anglers have changed the moniker from “fish of a thousand casts” to “fish of ten thousand casts!”

How many eggs do muskie lay?

What is the best time to catch musky?

The spawn is the best time to catch a muskie. They are concentrated in shallow bays and are therefore easier to find. The pre-spawn seems to be the best part of the spawn for catching. This doesn’t mean they will eat or take a lure readily though, be patient.

How long does spawning last for musky?

5-10 days. Males enter spawning grounds before and leave after females.

Can you catch musky during the spawning season?

Where do muskie spawn?

Muskie tend to like 2-4 feet of rather heavily vegetated bays for spawning. Gravel or sand and gravel bottoms are key. Slack water rivers with these same characteristics are good spawning areas too.

Muskie aren’t the easiest to catch but, if you decide to try, you could just come up with the fish of a lifetime!

The spawn brings the generally wide-spread populations and concentrates them in shallow water making them easier to find. You’ll still have to be patient and do the work to get them to eat however.

Please add your comment below and tell us about your Muskie spawn experiences!