Most of us can agree that chasing trout on a warm, calm, bluebird day is generally our ideal vision of a fun and fulfilling day on the water.

But should it be?

While fishing in a cold downpour might not be your ideal situation or your notion of a great day wading or afloat, maybe… just maybe… you’re leaving fish (and great experiences) on the table…or in the river in this case.

In the next few minutes, I’m going to lay out my experiences with foul-weather-fishing, the good and the bad, and even some of the ugly to see what good can come of braving a sudden torrent or even a long, gray drizzle of a day.

Your Gear (or Lack Thereof) Can Make or Break a Day

Before we even talk about fishing, I can’t state this too many times. I’ve been in this game long enough to have seen a ridiculous amount of scenarios play out. I’ve played the trout fishing game basically my entire 40-some years on this planet and have had some pretty rough experiences myself, so… 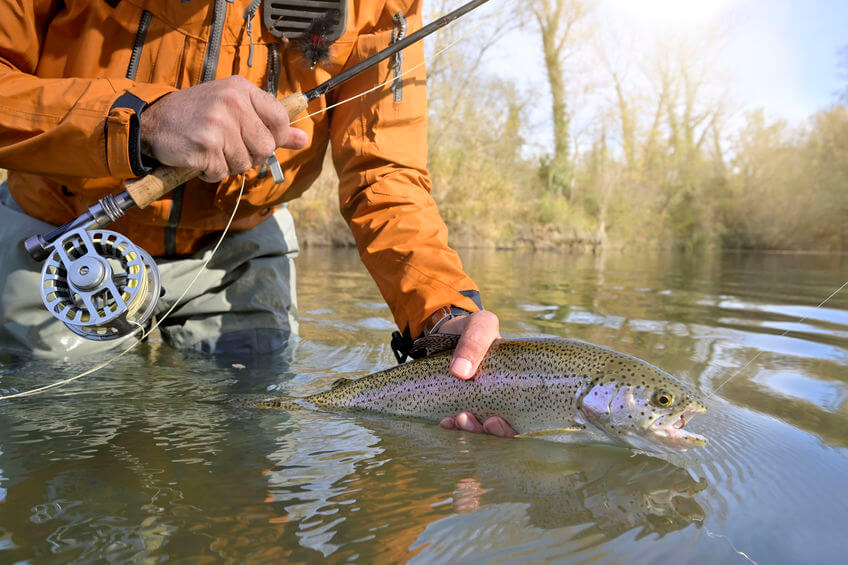 I am still baffled as to why clients of mine, when instructed to bring a rain jacket on the float, still refuse, saying something like, “It’s 92 degrees and sunny today. Why do I need a jacket?” to which I retort, “Okay, brother, it’s your a**. It’s not like I have any experience out here. You’ve been warned.”

Cut to 1:30 in the afternoon when the heat has built up to a crescendo of black thunderheads rolling in off the western mountains. “Yep, it’s going to get ugly. I have my extra wading jackets under your seats for you. They’re old and worn but better than nothing. You’re welcome.”

If you’re in a raft or drifter, you’ve pretty much nowhere to hide until the end of the float. Motor or jet boat, you could possibly duck under a console or canopy.

Walk-waders will generally head back to the rig or try to hide under some brush. Any way you slice it, you’re either soaking, cold, and probably miserable AND/OR you’re missing some fishing. Stop playing roulette and just head out prepared.

So what about the fishing itself? What does rain have to do with things like feeding habits?

What about old adages like “low-pressure turns on the fishing” and “dark skies, dark flies?”

In my personal and professional experience in the world of trout, it’s very difficult…dangerous even…to use phrases that include “always” or “never” or to speak in absolutes. While there might be probabilities and tendencies, definites can get you into trouble.

The only thing close to certain, that I can think of, is the law of percentages.

Fewer drifts equal fewer fish. That’s all. I’m not a “fish counter” by any means…I’m a “quality of the day” counter. But fewer good drifts amount to fewer chances for fish. That’s fewer CHANCES. Not guaranteed fish. 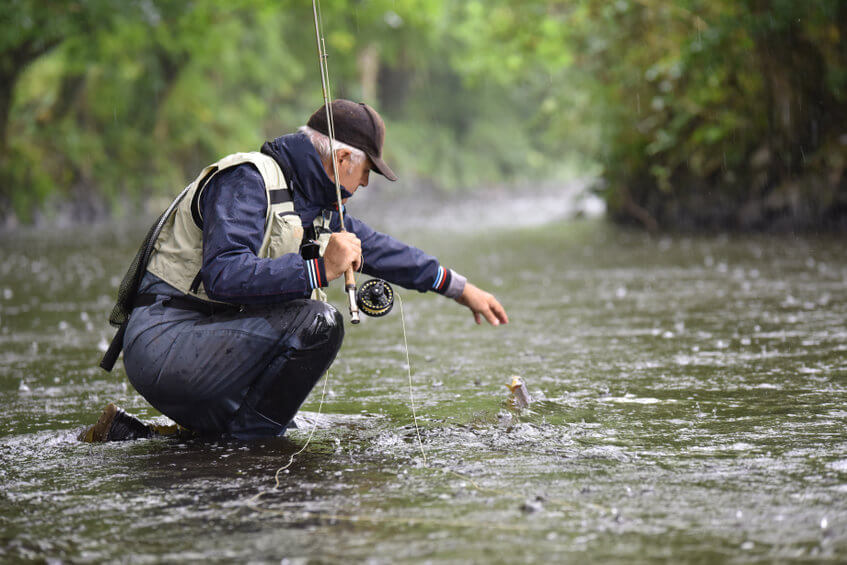 Can we shed some light on the adages, proverbs, and maxims of trout fishing?

I’m sure you’ve heard it said that a thunderstorm will turn on the fishing! That the environmental changes make them want to eat more or at least take a fly more willingly.

The truthful answer is this: Sometimes.

Sometimes doesn’t bolster much hope of attaining the season-best grip-n-grin or filling the creel for your campfire dinner. But it’s the truth. As stated above, there are little to no absolutes in this endeavor. There is sometimes. Maybe you’ll even find a “more often than not” here and there.

I have, however, seen too many instances where fish were happily sipping sulphers from the surface or willingly taking a bead head pheasant tail in the stable, sunny high pressure only to be turned off by a deluge and a low pressure system.

I have also seen the inverse where the sun was beating the water’s surface, where ospreys cruised high above empty-clawed, and not a fish was in sight. Cue the cool clouds and drizzle and, voila! The fish appear out of thin…water!

I’ve seen too many times where the river was clear and buggy, the browns were chasing caddis pupae under the willows, the rainbows were in a frenzy grabbing yellow sally nymphs before they escaped to hatch all under the bright sun or high/dry clouds only to watch everything disperse with the onset of a sudden downpour, the river turn off color and the fish seemingly vanish.

I’ve also seen the “perfect day” conditions be tough on even experienced anglers only to witness a gully washer (quick, heavy downpour that forms runoff in seemingly every nook, cranny, and gully) and have the trout start hitting a worm pattern as they frantically grab any aquatic or terrestrial annelid in sight!

I’ve witnessed no hatches all day until a cold shower hits and the mayflies start popping like crazy.

Some of my best dry fly fishing has been in the rain (or even the snow too)! 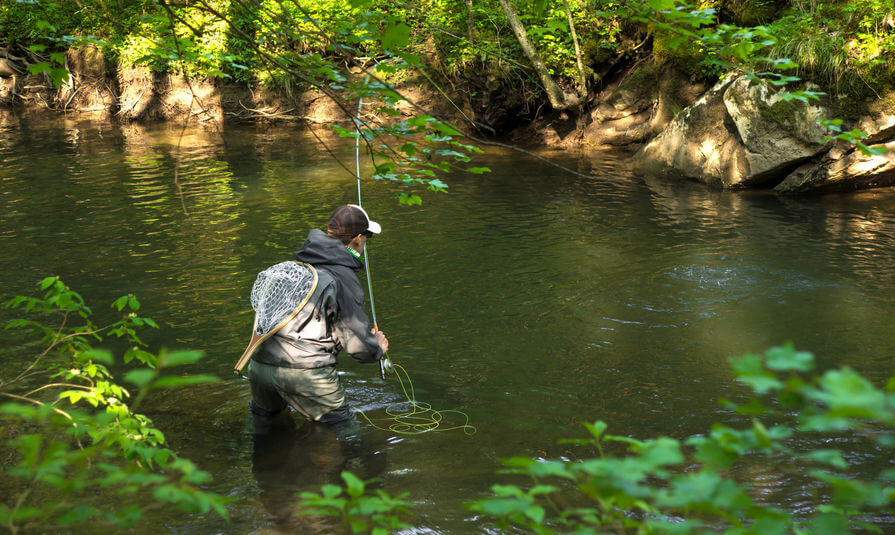 What About Dark Skies, Dark Flies?

This notion seems to work in some areas of fishing but, at least in my experience, not always in trout fishing.

I will say this, however:

I have seen something resembling a ray of hope in the consistency department; with the onset of cloud cover, whether accompanied by rain or not, trout can become more willing to leave cover to feed, especially on a dry fly, emerger, or on a streamer.

They know that the lower light makes it harder for prey to see them and are therefore often more willing to leave cover for food.

If accompanied by low atmospheric pressure, or at least a drop in said pressure, you may find larger fish out cruising or being more willing to take vs bright, higher pressure situations.

Clouds and rain MAY help trigger hatches as well. As stated above, a river without any moving insects may become alive with a fishy buffet, in spite of or because of a cool rain shower. But again, the inverse is also possible. The rain may shut off the food source like a faucet.

So what does this all add up to?

If you want predictability, you’re in the wrong game. It’s not why we’re here. It’s not what brings us back “in pursuit of.”

The absence of absolutes is part of the fun. You can definitely pick up on behavioral patterns regarding specific rivers, lakes, or waterways but you’ll find, that even if your insight works most of the time, it often won’t work always.

It may not work on other waters, especially as you move farther away from your home water. 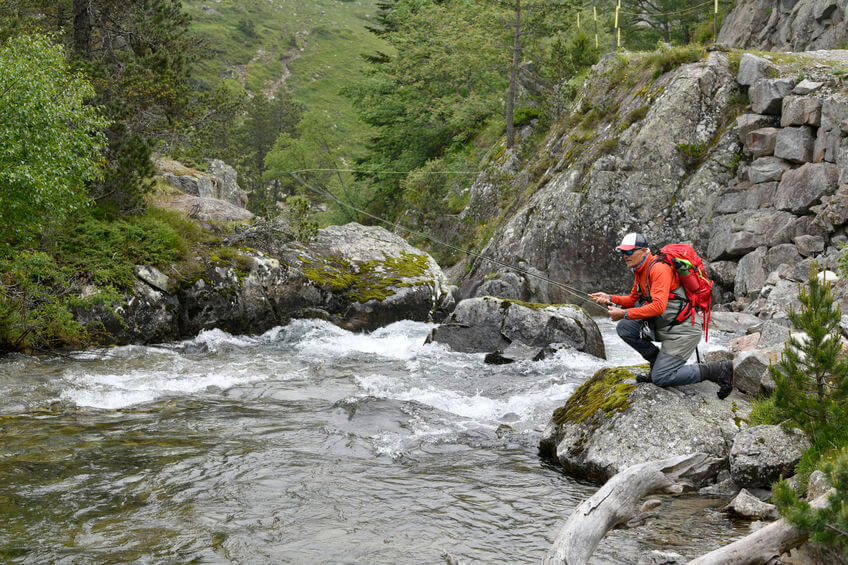 Fish Don’t Feel the Rain… or Do They?

Do fish know it’s raining? Probably not. When your world is water, more water is like more air to a mammal. More likely they “hear” or feel the impact of water on the water unless the stream in question has any “loud” (heavy) flow.

What they do realize is changes.

But why does this matter?

Trout are greatly sensitive to changes in atmospheric pressure. If the fish are happy and feeding in high pressure, a change to low may turn them off. If they’re not happy in the high pressure, a drop in the pressure may help them become active again.

Trout are greatly sensitive to changes in water temperature. Trout like cool, clean water. But if they’re happy, acclimated, and feeding, a change in this may shut things down. If the water is warm and unwelcoming, a drop in the water temp from the cool rains may be just what the doctor ordered.

Trout are also sensitive to changes in streamflow or current. Trout want easy food access with lower output when possible. If the current flow pattern changes, the trout have to change.

Generally, a flow dropping is an easier change on a trout but it’s still a change. A jump in flows generally has an adverse effect on a trout’s stability, its preferred location in the stream, and where its food is coming from. 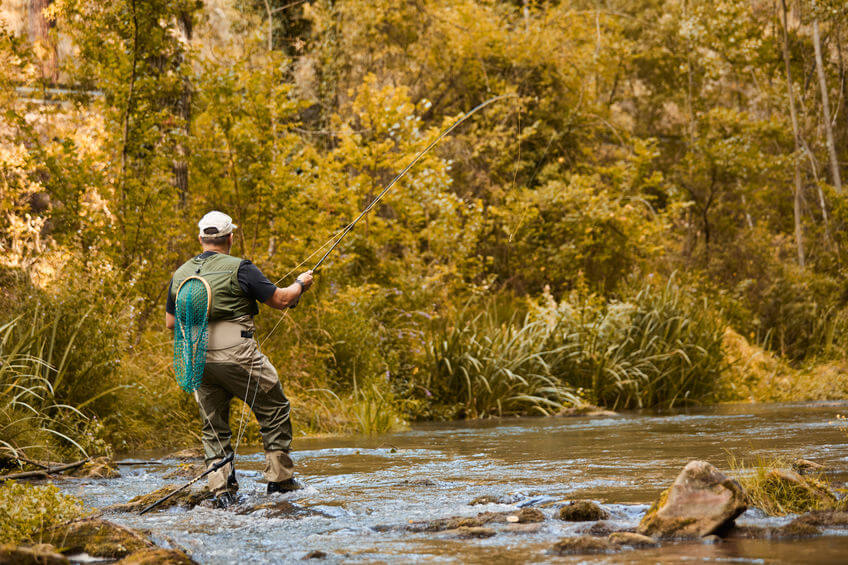 More than any fish I know aside from, say, permit. They’re more temperamental than my freshman year girlfriend was.

So you have to get out of your human head a bit, put on some trout shoes…or fins… and try to think as they do. Even just a little. Observe and see where the changes are. That’s where the subtle magic lies.

If the trout in your river/run/pool are happy and feeding, whether on nymphs or dries, a sudden rain storm (generally a drop in pressure, air temp, and even water temp in some cases with a higher amount of rain) can turn things off.

If this is the case, you may want to switch to a streamer and see if the cloud cover has the fish willing to move around freely or if the low pressure has turned their “aggression switch” on or not (trout can become more aggressive when atmospheric pressure drops).

If the trout are laying low out of the sun, keeping cool and not moving much in the depths of the riffles, a sudden rainstorm may “turn them on.”

It just may lighten their sullen mood, allow them to move freely under cloud cover, and cool things to a comfortable level.

And if the rain storm itself doesn’t trigger a hatch or at least get some bugs moving, the rain’s tail-end…the point where the drizzle eases way up but is still tangible and the sun isn’t blinding and hot quite yet…that might be the magic moment that the water comes alive with bugs and feeding trout.

Observe what’s going on around you at all times. Understand what’s changed and adjust your approach. Were trout happy before the rain? Were they not?

What changed and by how much? And if you don’t know, adjust or change one thing at a time… the water you’re targeting, the weight you’re employing, the flies you’re using, your attitude and gratitude for being on the water in pursuit of trout.

I promise, if you’re warm and mostly dry (because you brought a rain jacket), the magical time where a rainstorm turns the trout on might be one of the more magical times to fish. You may just find your season’s best out there and have your pick of pools, runs, pockets, and holes.